A little blog about the vlog 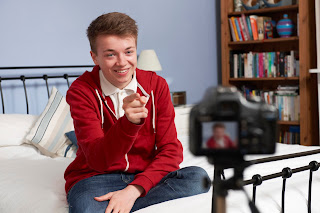 You might think the internet consists mainly of cat videos (see our earlier post on Lolcats), but I would like to draw your attention to another online genre which has received much less attention – the video blog (vlog).

Vlogs typically feature a single speaker talking to a camera and can be found on online platforms such as YouTube. Yet, while the speaker addresses a non-present audience, he or she uses many of the features one employs in face-to-face conversation, but with a twist. How exactly do these features differ? And what strategies do vloggers use to involve their audience?

In face-to-face conversation, people can indicate participant roles (for example, addressee or eavesdropper) through the content of their speech, such as using terms of address (Jack, or Jane), personal pronouns (you) and questions. In vlogs, the addressees are not present and the speaker may not even know who they are. Maximiliane Frobenius’ analysis of 30 YouTube videos posted online found that vloggers negotiate this uncertainty by using strategies such as if-clauses (e.g. if you’re interested), medium-specific terms (e.g. vlog fans, youtubers), and the default –general terms of address such as you or you guys).
Such strategies motivate the audience to respond to the vlog and leave comments, which may refer back to the content of the vlog. In one example a vlogger playfully referred to users of digital media that traditionally use keyboards as keyboard cowboys. This metaphorical term motivated the audience to respond: one viewer took up and extended the metaphor to comment in writing that other users “maybe just didn’t like straddling their keyboards”.

In real life, a conversation usually has a history which includes previous conversations between the participants, which may be mentioned or referenced. This is also the case with vlogs (e.g. “If you’ve seen my latest vid…”), but there are several differences. In vlogs speakers talk directly into a camera, and have absolute control over topic and wording. Also, the vlog may remain online until the vlogger removes it.

Another difference is that in everyday conversation people must be physically near each other. In vlogs, on the other hand, the physical space that the speaker/hearer are situated in, is not the space where communication takes place. This property can be taken up creatively by the vlogger, like in the following example in line 5:

1 and it’s four hours and ten minutes in running time.
2 if you want to win a copy of this,
3 all we ask is you tell us your favourite uh,
4 Doctor Who:.. uh dalek uh episode,
5 uhm .t and if you just put it in the comments which is just below down here, {points down}
6 uh and uh the winner will be drawn in seven days from now.

The vlogger, asking the viewers about their favourite Dr Who episode, uses a medium-specific gesture. He points at a comments section, which does not really exist in his physical surroundings. By this creative use of gesture, he demonstrates his ability to imagine the viewer’s perspective.

Unlike face-to-face conversation, gaze shift in vlogs can’t be used to signal to listeners that they are being directly addressed, or to show speakers whether the listeners are following what they are saying, as vloggers usually look into a camera but have no access to their viewers’ gaze. However, gaze can play a role when others enter a vlogger’s surroundings, who may not be seen by the audience. By shifting the gaze away from the viewers and then back, especially when accompanied by comments, the vlogger can signal to the audience that they are the ones being addressed. Obviously in face-to-face interactions this sort of commentary would be unnecessary as participants would be able to easily identify the reason for the loss of attention, such as a flatmate… or a cat!

This summary was written by Danniella Samos
Posted by Jenny Cheshire at 15:29 2 comments:

The truth about British tag questions

I bet you`ve heard about tag questions (TQs) before, haven`t you? But, apart from knowing what kind of question they are, have you actually thought about what these TQs actually do? You might think that the primary goal of the person who utters a question is to ask for some knowledge that they previously didn’t have – and you would be quite right. However, is there something more to TQs than just questions?

The thought that there might be more to questions than just a request for information has previously crossed a number of minds, some of them belonging to professional linguists. For instance, Ditte Kimps, Kristin Davidse and Bert Cornillie set out to create a typology of the basic functions of English TQs in speech. They trawled through two corpora of spoken British English – because TQs typically occur in spoken language. The corpora were the London-Lund Corpus of Spoken English and the Bergen Corpus of London Teenage English.

Overall, the researchers came up with five functions that a TQ can perform. Apart from being a question i.e. a linguistic strategy for seeking information, TQs can function as:

The criteria used in the categorization procedures were the intonation on the tag (whether the last part of the TQ is pronounced with rising or falling intonation), the polarity of the tag (for example, in he`s fine, is he? there is constant polarity, as opposed to in he`s fine, isn`t he? where there is regular polarity, meaning that the tag is negative but the preceding clause is not). The authors also considered whether the TQ was the last item preceding a response (so-called turn-final TQ) or whether the same speaker continued his or her turn in the discussion after asking a TQ (so-called turn-medial TQ).

Surprisingly enough, only 20% of all occurrences were categorized as questions. The examples include (the TQs are underlined):

B:  he says the contraction makes it quite normal, but the other doesn’t
A:  you’re sure of that, are you?

Here you see all the typical ‘textbook’ features of questions: rising intonation, expectation of a response, lack of knowledge on the part of A. Interestingly, constant polarity is more frequent in questions than in any other function types of TQ.

What about the other function types? 21% of the data consisted of TQs that were statements not usually expecting a response. As a rule, these are turn-medial and uttered with falling intonation on the tag. For example:

The most common function (44%) of the TQs was a statement-question blend; that is, the TQ states a specific proposition, but the speaker expects a response. 88% of this type of TQ did get a response, usually confirming the proposition. The speakers usually positioned themselves as more knowledgeable, hence the statement part. A typical example of a statement-question blend is:

Finally, a tiny (3%), but peculiar part of the data contains TQs initiating an exchange where the speaker is demanding or offering a desired action, as in this example:

you know, Pat, don’t say that, will you?

These are usually pronounced with rising intonation on the tag, which indicates uncertainty and thus softens the request that the addressee complies with the command.

This summary was written by Marina Myntsykovska
Posted by Jenny Cheshire at 16:35 No comments: