Giving directions: do women do this differently to men? 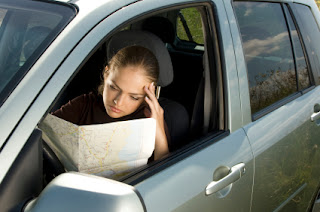 Previous research has found many differences in the way that men and women give directions when stopped and asked the way. Women tend to refer to landmarks such as particular buildings that will be passed, while men tend to orient people in terms of ‘North, South’ and so on. Men tend to estimate the number of miles to the destination, and to make fewer mistakes than women when describing the way to the destination.  However this research has almost always been based on role plays or imaginary scenarios. Jennifer D. Ewald gathered data from a more natural context, by driving alongside a customer in a petrol station, winding down her window and asking the person for directions. She did this 60 times, asking 30 men and 30 women. Ewald found no differences in the directions that she received, with the single exception that men tended to estimate how far away the destination was more often than women did. However the men’s estimates were more likely to be wrong than the women’s!

Ewald’s research also revealed some interesting points about direction-giving as a pragmatic act. Learners of English are usually taught to ask for directions using a direct request such as “excuse me, please, can you tell me how I can get to X?” but Ewald found that indirect requests were just as useful. Her question to the 60 men and women was “excuse me, are you from around here?” and then, to those who said “yes” she asked “do you know where X is?” It seems that the context of the petrol station and a person driving a car is enough to trigger the understanding that the question is a request for driving directions and not, for example, some kind of introduction to a market research survey.

Ewald concludes that learners of English should be exposed to authentic examples drawn from natural contexts so that they can understand how native speakers perform routine speech acts such as asking for directions. Perhaps they should also be taught that, contrary to popular belief, women are just as likely to give them accurate directions as men are!

This summary was written by Jenny Cheshire
Posted by Sue at 11:30

Email ThisBlogThis!Share to TwitterShare to FacebookShare to Pinterest
Labels: Language and gender, Pragmatics