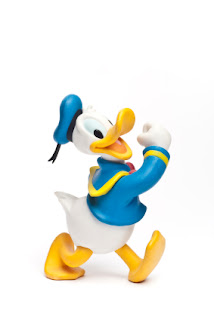 Does just your Donald make sense to you? It is rhyming slang, where a word is replaced by an expression – usually two words, each stressed – that rhymes with it. To make things more confusing, the rhyming expression is sometimes shortened to just the first word, so that the meaning becomes less predictable. Here, luck is replaced by Donald Duck, which is then shortened to Donald.

Antonio Lillo tells us that this type of wordplay began in the first half of the 19th century as a secret code among the lower classes and the underworld in London. This is why it’s often associated with Cockney. Later, rhyming slang spread to Australia, South Africa and the USA (though in the USA it is still used only by the criminal classes). Within the UK, it travelled to other large urban areas and in many of them ‘home-grown’ rhymes developed, including in Birmingham, Manchester, Newcastle, Belfast and Dublin. According to Lillo, though, nowhere was rhyming slang cultivated with as much enthusiasm as in Glasgow – partly because of the powerful working class ethos of the population and partly because of strong links between Glasgow gangs and the London underworld.

Population movement and the electronic media have produced ‘supra-local’ rhyming slang expressions, such as Britney Spears for ‘beers’ or Fat Boy Slim for ‘gym’. Nevertheless many expressions are still heard only in specific urban or national varieties of English, including the variety that is his focus here – Scottish English.

The second group consists of home-grown Scottish rhyming slang. Lillo gives a glossary at the end of his article containing about 200 modern expressions of this type. It includes expressions not heard elsewhere, like Barr’s Irn-Bru, ‘clue’, in the title of the article. Irn Bru is the brand name of a fruit-flavoured soft drink which is popular in Scotland, manufactured by A. G. Barr plc. The category also includes Scottish expressions that have made their way into other varieties of English, such as Gardner Spiers, ‘beers’, after the Scottish footballer and manager. This is heard in Yorkshire as well as in Scotland.

One characteristic of Scottish rhyming slang is that expressions with two nouns, like the Cockney trouble and strife, ‘wife’, are rare.  Perhaps this is because the younger generation of Scots find them old-fashioned. A second characteristic is a particular liking for rhymes based on proper nouns. For example, Tony Blair, used generally in the UK and Ireland to mean ‘hair’ (the old Tony Blair needs a cut) is used in the plural in Scotland to mean ‘stairs’ (he’s doon the Tony Blairs). These characteristics, though, are typical of modern rhyming slang in general. What is distinctive about Scottish expressions is the name that the rhyme is often based on. Unlike Cockney rhyming slang, which takes its proper names from all aspects of modern culture around the world, Scottish speakers have a bias towards both people and things that are specifically Scottish (as already seen in the Irn Bru and Gardner Speirs examples).  Lillo draws attention to an abundance of the names of footballers, perhaps due to a particular liking for rhyming slang amongst males in Scotland and to an age-old Scottish connection between football and national identity. However football is not the only national icon enshrined in Scottish rhyming slang: Lillo points out that although Armadillo, ‘pillow’, may seem odd to non-Scottish ears it will be familiar to anyone who recognises the metaphorical nickname of the Clyde Auditorium in Glasgow. Rhyming slang can therefore function as an effective marker of national identity and pride for the Scottish people who use it.
__________________________________________________

This summary was written by Jenny Cheshire
Posted by Sue at 09:48