‘Me pencil’s up me jumper’. Why do children say me for my? 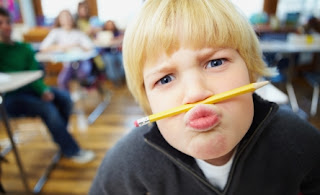 Recent research finds that in the case of 9-10 year old primary school children in Teesside possessive me has special meanings that are not carried by possessive my.
Julia Snell did fieldwork in one working class and one middle class primary school in Teesside for 17 months, working as a classroom assistant and playing and chatting to the children in the playground. She gave radio microphones to the children so that she could record them chatting to each other as well as talking in class.
Her analysis of possessive me is based on 50 hours of recorded speech from 20 children: 5 boys and 5 girls in each of the two schools. She was surprised to find that the children did not use possessive me very often – only 33 times out of a total of 670 first person possessive forms (in each school ma was the most frequent form, followed by my). Because possessive me was not very frequent she was able to study in detail all the 33 contexts where it occurred, something that researchers had not done before.
Almost all of the me forms occurred in the working class school (30 of the 33 forms), confirming therefore that this form is typical of working class speech. More importantly, though, every one of the me forms seemed to convey a special interactional meaning. Sometimes possessive me occurred in stretches of speech where children were trying to impress their friends with risqué humour: for example, in the extract below Harry pretends that he wants his friend to buy him some beer (remember that these boys are only ten years old!)
Harry:  can you get me some Budweiser (.)
f – they’re only er tr-
er one pound fifty a pack (.)
so get me ten packs ).)
because I’ve got a Budweiser thing here (.)
I LO::VE MY [mi] BUDWEISER
<laughs>
On another occasion a boy used several possessive me forms when he was exaggerating an injury to his arm, hamming up his agony to a female audience. Yet another example involves a girl, Helen, laughing at Nathan who has just said that his pencil is in an unusual place:
Teacher:         Nathan
sit on your bottom please and get on
Nathan:           I’ll just get my pencil
it’s up my jumper
Helen:                         <laughing> my [me] pencil’s up me jumper
Helen repeats what Nathan said but changes his pronunciation of my to me. Snell argues that in this way Helen makes it clear that she is ‘performing’ Nathan. By changing the way that he pronounced the word she simultaneously distances herself from him and aligns herself instead with the teacher and the other pupils at the table where they are working (it may be relevant that Nathan is a newcomer to the class).
What these and the other uses of possessive me in these recordings have in common is that children present themselves as somewhat detached from what they are saying, adopting a mock serious and jokey stance. Of course this stance is not achieved just by using me instead of my. These sections of the discourse have other characteristics too. Sometimes they are spoken more loudly, sometimes the pace of speech is quicker, and sometimes there are lengthened vowel sounds (as in the Budweiser example above), laughter or emphatic stress. There may be local dialect forms. However all these other features can also be used to create other, different interactional stances, whereas me is used exclusively for the stylised uses described here. Furthermore the children only use possessive me with other children, never when talking directly to their teacher or when reading aloud.
Snell argues that possessive me is more than just a non-standard, working class feature. Instead, the children in her study are “savvy sociolinguistic players” using this non-standard form very skilfully in interaction to construct a playful, jokey identity. Perhaps this is one aspect of a more general stylised working class identity.
Previous research has found that possessive me is very widespread, occurring in most varieties of English throughout the (with the possible exception of , the Orkneys and Shetland) and in many varieties of English around the world. Other research in the Teesside region finds that adults use this form much more often than the children in Snell’s study. Perhaps its relative infrequency in the children’s speech indicates that it is beginning to die out in Teesside. Snell concludes that, if so, the children’s usage suggests that as forms become used less often they can take on a distinctive interactional meaning. It is rare for researchers to examine non-standard forms in their discourse context with as much detail as she did in this study, and she calls for more research of this kind, with adults as well as with children.
_________________________________________________________
Snell, J. (2010). From sociolinguistic variation to socially strategic stylisation. Journal of Sociolinguistics 14/5: 630-656.
doi: 10.1111/j.1467-9841.2010.00457.x
This summary was written by Jenny Cheshire.
Posted by Sue at 11:39