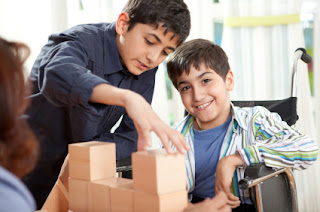 (1) He helped his brother build a wall
(2) He helped his brother to build a wall
Which of these two sentences would you say: (1) or (2)? Most English speakers use both, but when do they choose one rather than the other, and why?
Previous researchers have found that people use the “bare” infinitive (as in help build) more often than the full infinitive (help to build) when they are speaking than when they are writing, and more often in informal situations.  However, Arne Lohmann discovered that things are a bit more complicated than that. He analysed 1718 examples of help with a following infinitive – both bare and full – in the British National Corpus.
There was a complex set of findings for spoken and written English, though overall different genres of spoken English did seem to favour the bare infinitive more than non-fiction written English. However, what influenced the use of the bare infinitive more than anything else was when there was a second full infinitive after HELP: so, with a sentence like (3), people were more likely to say help the candidate relax than help the candidate to relax.
(3) your job as an interviewer is to help the candidate (to) relax
Also relevant, though less so, was the number of words between HELP and the infinitive. The bare infinitive was more likely in a sentence like (4), where there are three words (the home decorator) between HELP and the infinitive.
(4) the automatic wallpaper pasting machine helps the home decorator to achieve really professional results
It was less likely in a sentence like (5), where there is only one word (me).
(5) I don’t mind talking about it because it helps me get over what happened.
The more words between HELP and the infinitive, the more likely was the full infinitive, probably because as sentences get more complex, including to makes the grammatical structure more explicit.
A further relevant factor was when the subject of HELP was human: so, the fact that the subject of (3) is an automatic wallpaper pasting machine may account for the use of the full infinitive in that sentence. Perhaps we see a human subject as more involved in the helping event, and this small conceptual distance between the subject and the verb is then matched by a small linguistic distance between HELP and the meaning of the infinitive.
Why should a second infinitive have such a strong influence on saying help build rather than help to build? Lohmann suggests that this reflects our system for speech production. Current theories assume that words in our mind are organized in the same way as neural networks, with words roughly corresponding to neural nodes, with links between them. Like neurons, when a node has been activated it needs a recovery phase. Speakers therefore avoid repeating a similar or identical form, as this would use the same node again in the network.
Like all research, finding a plausible answer to this small question raises many other questions that now need to be answered. What caused English speakers to drop to after HELP in the first place? Do they drop it only with HELP, or are there other verbs that can have both a bare infinitive and a full infinitive after them? Is this more common in American English than British English? And what about other types of grammatical construction, as in all we have to do is (to) wait?
_________________________________________________________
Lohmann, Arne (2011). Help vs help to: a multifactorial, mixed-effects account of infinitive marker omission. English Language and Linguistics 15 (3): 499-521.
doi: 10.1017/S1360674311000141
This summary was written by Jenny Cheshire
Posted by Sue at 10:00