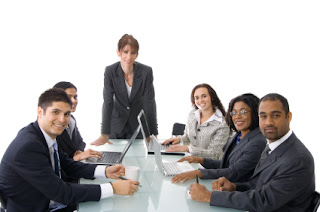 Why are there still a minority of women in executive roles?
Do women make less of a linguistic impact in the boardroom than men? Is this one reason why there continues to be a lack of women who succeed at executive level? These are questions that researcher Judith Baxter set out to explore in her analysis of data from senior management meetings and follow-up interviews in seven multinational companies.
In her article, Baxter reminds us that men are still at the top when it comes to ‘the most powerful roles in most national and multinational companies, not just in Britain but worldwide’ and that women are rarely found in the top positions in boardrooms.  Of course there are many reasons why this is the case but Baxter argues that little attention has been given to possible linguistic explanations, an oversight that she aims to redress in her research, which explores whether the use of leadership language is a possible reason why women are not reaching the highest positions in business.
The research team spent time within seven leading private sector UK companies from a range of business sectors and in each case observed and recorded at least two senior management meetings, ensuring that one meeting was led by a female and the other by a male, both of equal seniority. After each meeting, the leader and several of their colleagues were interviewed on a one-to-one basis resulting in a total of 48 interviews. The interviewees were asked to consider the use of their language to achieve their goals during the meeting and were also asked who they thought had been the most ‘effective’ in the meeting and to define what they meant by being effective.
During the interviews the researchers noticed that women tended to show a raised awareness of using linguistic strategies as a way of effecting leadership. The women would often compare their language use with equivalent male leaders but they found no instances of men comparing their language use with the women leaders. The researchers also noticed that the women leaders used what they call ‘heightened or pre-meditated language’ especially during difficult interactions with male colleagues in the meetings.  The heightened or pre-meditated language (which they also refer to as ‘double-voiced discourse’ (DvD), a term originally coined by the Russian philosopher Bakhtin) is defined as ‘a judgment call about how to make the ‘right’ linguistic impact with colleagues’ and could take many forms, such as politeness, humour and assertiveness. All instances of such language use were coded and it was found to fulfill four main functions; to anticipate and dilute possible criticism (Anticipatory); to heighten impact and display personal power (Authoritative); to correct or repair a mistake, usually their own (Corrective) or to reduce authority and build rapport (Mitigating). Interestingly, they found that the male leaders also used these strategies but less so and in a less varied way.
The conclusions drawn from the study are that while men and women use a similar range of linguistic strategies to lead their teams, there is a clear gender difference in the data in one respect: women compare their language use with that of their male counterparts but the men do not compare themselves with the women. Baxter argues that this is because women are still in an unequal position to men in senior roles and that senior women continue to be under greater scrutiny than their male equivalents. The consequence is that women draw more on the use of DvD, which ‘enables them to use leadership discourse strategies with a greater delicacy, discernment and adeptness than has previously been recognized in the field of gendered talk in the workplace’.
Baxter suggests that the use of DvD can be seen in two ways. On the one hand, such language use dilutes the impact of words spoken and makes the leadership message ‘harder to hear’. In this way it can be seen as a ‘survival strategy’ for many women who work in male-dominated environments and may then offer a linguistic reason why women are still struggling to reach those high executive positions. On the other hand, as Baxter argues, it can be seen as a ‘powerful resource’ for developing linguistic expertise among all leaders, regardless of gender. For female leaders especially, Baxter suggests that they might ‘find themselves in a stronger position to progress to the boardroom if they were to acquire the linguistic expertise of double-voiced discourse’.