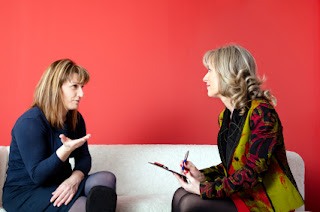 Metaphors can help us to explain ideas and feelings which are difficult to express.  This is particularly true in settings and contexts which are, by their very nature, emotive – such as therapy sessions between a patient and an analyst.

Dennis Tay, who analysed transcripts of conversation between therapists and patients, noted that metaphors (a term which for him includes similes) are often accompanied in our speech by *discourse markers* which signal their occurrence.  For example, like compares a situation with the subject of the metaphor, such as the cake in that cake is so luscious, it’s like eating velvet, while phrases such as sort of help soften the comparison being made, e.g. he gave me so many flowers, it was sort of like living in a florist’s.

In analysing the data, Tay identified metaphors by comparing their meaning in the context with their literal meaning and establishing the mismatch between the two.  On the whole, he found that therapists used metaphoric expressions to help define abstract concepts in more concrete terms (such as relating one patient’s problem of panic under pressure to that of bomb squad personnel faced with the decision of ‘which wire to cut’).  In contrast, patients tended to use metaphors when they were expressing and explaining thoughts, memories and emotions (for example, when a patient describes his personality as lacking a ‘light and fluffy mode’ and saying that instead he is more like ‘heavy cotton’).

Building on this, Tay looked at how discourse markers such as you know, right and I mean signal how people use metaphors as they develop their discourse.  He noted that, while I mean (which signals some kind of self-adjustment or correction) was used less often by therapists (perhaps due to their greater self-assurance in speaking), in general discourse markers help when the expression of a concept is difficult, and can invite the other person to make inferences of their own, e.g. my life’s like some sort of Russian novel, you know?.

Taking the analysis of metaphor use and the placement of discourse markers together, Tay observed that many discourse markers were used to signal ‘key’ moments in the therapy discourse structure, such as the beginning of a metaphor and the continual linking of extended metaphors during speech.  Further research on these ‘junctions’ and how they are signalled (whether through discourse markers or other linguistic features), Tay suggested, will help therapists develop more effective strategies for patient communication.  In doing this, Tay added, metaphor research will become more applicable to real world concerns.

This summary was written by Jenny Amos
Posted by Sue at 10:38