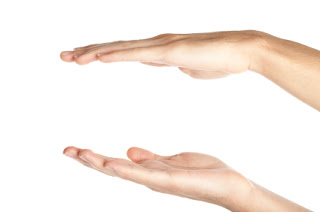 Children learn new words more quickly when their caregivers use symbolic gestures
Researchers have known for some time that young children’s vocabulary grows more rapidly when their caregivers talk a lot to them. So far, though, there has been little evidence of a direct link between the specific words that caregivers use and the speed with which their children acquire them.
Now Maria Zammit and Graham Schafer have shown that such a link really does exist. Not only that, their research suggests that children learn a word even more rapidly when their caregivers gesture at the same time as saying the word.
Zammit and Schafer recruited 10 white middle class mothers, all with babies aged 9 months. They chose ten everyday nouns for the study: apple, book, boot, bowl, carrot, cat, cup, dog, pencil and shirt. Every month, the mothers and their children were filmed in two situations. In the first, the researchers projected pictures of five of the objects onto the wall, one by one, and asked the mothers to talk to their child about each object. After 20 seconds they asked the mothers to stop. In the second situation, the word itself was projected, rather than a picture. The next month the other 5 objects were presented in the same two ways. This procedure was repeated until the children were aged 2 years and 2 months – past the age at which children have normally acquired these everyday words. The mothers were asked to keep a record, at home, of how old their children were when they first seemed to understand each of the ten words, and how old their children were when they first uttered each of the words.
Not surprisingly, the children who learned to understand the words at the earliest ages were those whose mothers had talked longest about the object. There was a similar though weaker association between the amount of speech from the mother and the age at which their child actually produced the word, reflecting the fact that comprehension usually comes before production. But the children who both understood and produced the words at the earliest ages were those mothers who frequently labelled an object while talking about it– in other words, who frequently used the word cat when talking about a cat.
What was surprising was that children also acquired the words at an earlier age when their mothers not only labelled the object frequently but also made symbolic gestures to describe it (such as, for pencil, miming the act of writing). Simple pointing gestures at the picture of an object on the wall were less effective.
Zammit and Schafer suggest that gesture helps children acquire a word because it captures the child’s attention, making the mother’s speech more memorable. The gesture also adds information that can help children to retain and recall the association between the word and the object that it refers to. Some mothers seemed intuitively to realise that using gesture to describe an object while they labelled it, even before their child could understand the label, would help their child to learn the word.