The past year has affected all of us in one way or another but have you ever thought about what effect it may have had on our language?  Philipp Wicke and Mariana Bolognesi did just that in their study of thousands of tweets posted during March and April 2020.

Due to social distancing measures, people were quick to use social media platforms like Twitter to connect with others and express their feelings, sending around 16,000 tweets an hour with hashtags like #coronavirus, #Covid-19 and #Covid. The researchers wanted to explore this online discourse and were particularly interested in how the pandemic was discussed using the metaphor of war. Discourse about disease has often been found to use this metaphor and cancer patients frequently complain that they are described as being in a 'battle' with the illness, which they find negative and unhelpful. With this in mind, Wicke and Bolognesi decided to also explore other figurative ways in which Covid was being described. 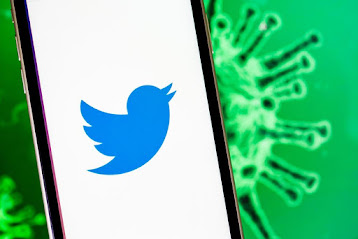 They collected 25,000 tweets a day that contained at least one of eight covid-related hashtags. Retweets were not included nor were more than one tweet per user in order to gain a balanced view of language use. 5.32% of the collected tweets mentioned war, the most common words being 'fight' (29.76% of these mentions) and 'war' (10.08%), whilst 'combat', 'threat' and 'battle' were also prevalent. The researchers noted that this could reflect this early stage of the pandemic: it was a global emergency and urgent action was needed to confront the situation. Most of these examples referred specifically to the treatment of the virus and the 'frontline' workers dealing with its effects in hospital.

When they concentrated on other figurative ways in which Covid was being described they found it referred to in terms of a storm, a monster and a tsunami.  For example, the idea of the virus as a storm arose in 1.49% of the tweets and contained words like 'thunderstorm', 'rain' and 'lightning'; 1.13% of the tweets referred to a tsunami, using words like 'earthquake', 'disaster' and 'tide' and references to a monster occurred in 0.68% of the tweets with 'freak', 'demon' and 'devil' being prime examples. These negative images mainly referred to the onset and spread of the virus. It is clear, however, that the war metaphor was used significantly more than these others.

Wicke and Bolognesi conclude that their results confirm previous findings that the war metaphor is common in public discourse of disease; however, they found that it was used very particularly during the first weeks of the pandemic to refer to the initial medical response to it. They also suggest that all of these metaphors are negative and unhelpful and propose the construction of a 'Metaphor Menu', previously suggested with regards to cancer, to give the public more positive and desirable ways to talk about Covid 19 as the pandemic evolves and changes.

Posted by Devyani Sharma at 23:08 No comments: