Remember Iggy Azalea? Well, if you were just about anywhere in 2014, you might recall her smash hit song 'Fancy' featuring Charli XCX. In fact, that song was so popular that it earnt Iggy Ig's a Billboard award for the 'biggest ever hit for a female rapper'. But whilst she might be one of the most recognisable Hip-Hop artists of the current period, you might also recall that she's faced quite a lot of criticism too with many referencing the difference between her ethnicity (as a White Australian) and her distinctive rapping-style which has been referred to as a 'Blaccent' (literally a 'black accent').


But, why does Iggy sound 'Black'? And why do people perceive Iggy to have a 'Blaccent'? These are two questions that Maeve Eberhardt  & Kara Freeman decided to investigate in their 2015 paper.

By transcribing Iggy's entire back catalogue of albums, EPs and mixtapes, Eberhardt & Freeman set about analysing her distinctive rapping style. With newspaper articles referring to Iggy's 'Blaccent', the authors examined her use of features typically found in African American English (AAE) in her rap music. As a speech variety, AAE is typically spoken by Black individuals (i.e., African American) speakers who live in parts of Northern America.

One feature that the authors decided to explore is 'copula absence' which describes the tendency for speakers to pronounce the sentence "he's in here" as "he in here" - in other words, the verb 'be' (is/are) is absent from the sentence.

Whilst this feature occurs in many varieties (including some varieties of British English), in AAE, researchers have found certain patterns that seem unique to the variety. In particular, they have found that speakers tend to use higher amounts of copula absence before certain types of words and that this feature is more likely when the verb occurs before gonna as in "she gonna go home" and least likely before noun-phrases "Marie's in there".

Remarkably, by analysing Iggy's rapping style, Eberhardt & Freeman found good evidence to suggest that she wasn't just using copula deletion randomly but, rather, her use of this feature mirrored the same patterns that native AAE speakers exhibit! However, when they analysed Iggy's interviews, they found that she rarely uses copula deletion.

So, why does Iggy use a variety that's typically spoken by Black African Americans in her rap but not in interviews? One such explanation has to do with the music industry and genre that she's working in: Hip-Hop. As an art-form that originated in Black communities in the U.S., many of these artists come from this community and typically those who speak AAE - think of Jay Z or Lil Wayne. As such, the language associated with this genre of music - the 'Hip-Hop Nation Language' (HHNL; Alim, 2004) - is largely based in AAE and shares many features of this variety.

In order to get by and sell records, it seems then that you need to use the 'code' that's typical of the genre and rap in HHNL. But, as a White Australian, Iggy doesn't really look or sound like a Hip-Hop artist... Hip-Hop in an Australian accent doesn't seem to work! Herein lies the explanation for her performance of AAE.

Eberhardt & Freeman argue that she uses AAE to sound like a 'real' Hip-Hop artist in order to sell records. And she does this quite well- as we've seen she uses the same features in the right 'slots' as a native speaker. But, whilst she might be able to speak AAE like a native speaker, it seems that her performance is still pretty problematic. In fact, there are virtually hundreds of articles on Iggy's 'cultural appropriation' of AAE, with many referencing her use of this variety and her lack of authenticity as a White Australian.

So whilst Iggy may be claiming to be a "a white girl with a flow ain't been seen before" it seems that she's not the "realest" after all...


Posted by Jenny Cheshire at 14:55 No comments: 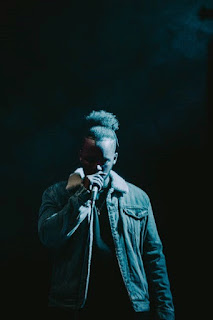 Posted by Jenny Cheshire at 13:53 No comments: