I sang the song or I sung the song? What do YOU say? 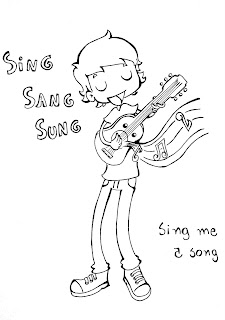 What do the verbs hang, spin, sling, sting, dig and slink all have in common? Answer: they all form their past tense and past participle by changing their vowel to <u>, so that I spin the wheel becomes I spun the wheel in the past tense and I’ve spun the wheel in the present perfect tense (using the past participle). So, what happens with verbs like begin, sing, drink, ring, shrink, spring, sling, stink and swim? On the face of it, these verbs look very similar to the first group of verbs but they behave differently.  In standard English these verbs have a past tense form with <a> and a different past participle form with <u>, resulting in three-part paradigms like begin - began- begun and sing - sang - sung.
However, it soon becomes clear – as researcher Lieselotte Anderwald has discovered – that there is frequently variation between two past tense forms in the second group of verbs. This variation is quite often reflected in the entries of some dictionaries, which permit an either/or past tense form for these verbs. For example, the Longman Advanced Dictionary of Contemporary English Use gives the past tense of shrink as shrank or shrunk and the past tense of sink as sank or sunk, with, in this dictionary, the second of the two past tense forms being attributed to American English usage (though this is not always the case in other dictionaries).
Anderwald investigated the use of <a> vs <u> forms among traditional dialect speakers in the Freiburg English Dialect Corpus (FRED), a corpus of traditional dialect data by speakers born (mainly) pre-1920 from across the UK. All instances of past tense forms of the most frequently occurring verbs that have the three-part paradigm - sink, drink, ring, sing, begin – were extracted from all dialect areas and each use was classified as being standard (e.g. sang) or non-standard (e.g. sung). From a total of 218 past tense uses she found that the non-standard forms were used in 91 (42%) cases. She then compared the traditional dialect speakers with young working class urban speakers from the Corpus of London Teenage Speech (COLT) and found that they used the non-standard forms almost 67% of the time (although we should add a cautionary note that there were only 12 instances of use in the corpus for this social group). Despite pressure from prescriptive norms, the results show that the use of non-standard forms for these verbs is as robust today as it has been in the past.
Anderwald explains this persistence in two ways. Firstly, the non-standard forms can be traced back historically to Old English so they are a long-standing feature of vernacular English. More importantly, though, she points out that the majority of verbs in English have the same form for past tense and past participle (not only those listed in the beginning of this article but also all regular verbs, which simply add -ed to both past forms) and therefore using the non-standard form in verbs like sing and drink is more ‘natural’ than their standard English counterparts because it conforms to the dominant pattern in English and thus eases the cognitive load of the language user. So if you say I sung the song – don’t worry, you’re in good company!
________________________________________________