#BlackLanguageMatters: Can linguistics change the course of justice?


The 2013 trial of George Zimmerman for the murder of unarmed Black teenager Trayvon Martin is well-known as the court case that sparked the #BlackLivesMatter movement in the USA. 17-year-old Martin was shot dead by Zimmerman, who claimed he was acting in self-defence and was eventually acquitted of all charges. The outcome of the trial caused outrage among the Black community over racial profiling, police brutality and inequality in the criminal justice system, and prompted the founders of #BlackLivesMatter to use the hashtag for the very first time.

It’s less well-known that the case also served as a ‘call to action’ among linguists. John Rickford and Sharese King of Stanford University studied the court proceedings closely, focusing on the testimony of one particular witness, Rachel Jeantel. A close friend of Martin, Jeantel was on the phone to him just moments before his death. As such, she represented an important ‘ear-witness’ and testified for over 6 hours in court, but her testimony was completely disregarded by the jury, who found her to be unintelligible and ‘not credible’. 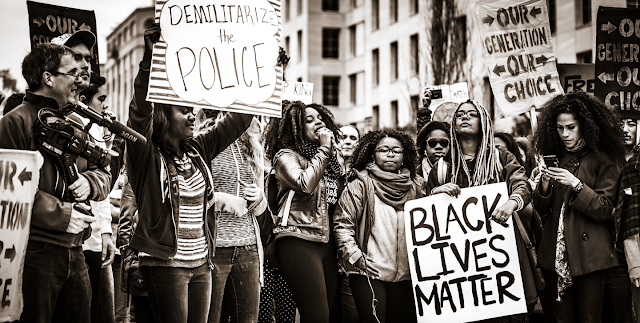 What does this have to do with linguistics? Jeantel is a speaker of African American Vernacular English (AAVE), also known as African American Language (AAL): a variety of English spoken by many Black Americans. AAVE has been studied extensively by linguists, who have shown that it is a systematic and rule-governed dialect of English like any other. Nevertheless, like most ‘non-standard’ vernaculars, AAVE is often stereotyped by non-linguists as uneducated and broken. Jeantel’s speech is no exception: Rickford and King note that she was ridiculed on social media throughout the trial, labelled as ‘inarticulate’ and ‘the perfect example of urban ignorance’.

As well as being lampooned online, Jeantel’s testimony was overlooked by the jury in their decision-making. Commenting after the case, one juror said that Jeantel was ‘hard to understand’, and another reported that ‘no one mentioned Jeantel in [16+ hour] jury deliberations. Her testimony played no role whatsoever in their decision’ (Juror Maddy, as reported in Bloom 2014) despite the fact that she was on the phone to the defendant moments before the shooting took place.

In their paper, Rickford and King set out to investigate linguistic reasons for why this happened. They start by closely analysing over 15 hours of Jeantel’s recorded speech, to see how it compares to that of other AAVE speakers. They found her speech to be ‘a systematic exemplification of the grammar of AAVE’. In other words, it displays patterning in lexicon, grammar and phonology that is typical of AAVE, and also reflects the possible influence of Jeantel’s Haitian mother and Anglophone Caribbean Creole-speakers living in Miami. Given these findings, the possibility that Jeantel was not understood because her speech was incoherent – or, as one commentator described it, ‘the blather of an idiot’ – is clearly ruled out. Why, then, did the jury neither understand Jeantel nor consider her testimony to be important in their deliberations? Rickford and King look at two possibilities in their paper: the influence of social bias and the issue of dialect unfamiliarity.

It is likely that social bias had an effect on jurors’ ability to understand Jeantel as well as their assessment of her credibility. Rickford and King cite several studies that show that ‘speech perception is influenced by listeners’ stereotypes of speaker characteristics’ – in other words, if White listeners believe that a speaker is Black, their comprehension actually decreases. Importantly, the Zimmerman trial jury was primarily White, middle-aged and suburban, with no African American members.

Considering dialect unfamiliarity as a factor, Rickford and King list a number of other court cases in which vernacular language has been misheard or mistranscribed. Part of the problem, they explain, is that courtrooms do not provide interpreters for dialects, but only for ‘foreign languages’. In other words, an interpreter would be provided for a Spanish or Vietnamese-speaking defendant, for example, but not offered to a speaker of Bajan Creole or AAVE. Depending on the dialect in question, this can lead to dangerous misunderstandings: Rickford and King give the example of a police interview in which a Jamaican Creole speaker’s words, given verbatim in (a), were first transcribed as in (b).


As this example shows, the distinction between ‘languages’ and ‘dialects of a language’ is not always clear-cut, and listeners are likely to have difficulties with comprehension if they are not familiar with the variety being spoken. In the Zimmerman case, Rickford and King show that Jeantel used several preverbal tense-aspect markers in her speech, such as stressed BIN, completive done, and habitual be. The authors point out that these features of AAVE have been mis-transcribed by non-AAVE speakers in other cases, meaning that it is very likely they were misunderstood in this case too.

Rickford and King conclude that AAVE was, in a way, ‘found guilty’ in the Zimmerman trial, since responses to Jeantel’s dialect unfairly prevented her testimony from being heard or properly understood, and undoubtedly affected the outcome of the case. In light of this, they argue that courtrooms are in serious need of expert linguistic input and dialect interpretation, and strongly urge linguists to help make courtrooms fairer places. More broadly, Rickford and King point out that language prejudice affects outcomes not only in the criminal justice system, but also in education, employment and healthcare, and call on linguists to dispel myths about speech and language in all domains of life.

Bloom, L. (2014). Suspicion nation: The inside story of the Trayvon Martin injustice and why we continue to repeat it. Berkeley, CA: Counterpoint.

This summary was written by Rosemary Hall

Posted by Jenny Cheshire at 13:45 No comments: