Going banana’s* about the greengrocer’s apostrophe 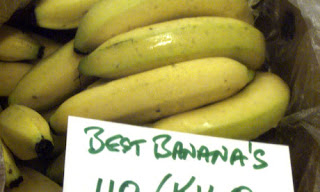 * To go bananas is an idiomatic, informal expression meaning to get angry or emotional about something

You may have noticed the recent negative attention that has been given to the use of an apostrophe with plural nouns, often referred to as the ‘greengrocer’s apostrophe’ because of its association with the prices of fruit and vegetables displayed in shops, as in banana’s 65p per kilo and lovely, ripe tomatoe’s. Of course, the apostrophe used in this way goes against current standard usage – the apostrophe is not required with plural nouns – but, as Joan Beal reveals, historically this was not always the case.

According to Beal, the use of the apostrophe in this way was common in 18th-century English. She traces the apostrophe back to its first introduction by printers in the 16th century as a device to mark omission and demonstrates how it came to be used both to mark possession (as in Sue’s pen) and then also to mark the plural of nouns ending in a vowel, as in the Italian Tongue was so well understood in England, that Opera’s were acted on the publick Stage, an example provided from The Spectator in 1711. It seems that 18th century grammarians either made no reference to the apostrophe at all or it was considered to be merely a printer’s device, with one of the most prominent grammarians, Bishop Robert Lowth, declaring in 1762 that few precise rules could be given concerning punctuation and that ‘much must be left to the judgment and taste of the writer’.

However, Beal demonstrates that there was growing condemnation of the greengrocer’s apostrophe during the 19th and 20th centuries. Although no mention is made of it in the first edition (1926), Fowler’s second edition of A Dictionary of Modern English Usage in 1965 contains a comment which refers to the use of an apostrophe with a plural noun as a ‘fatuous vulgarism’. The revised version of this dictionary in 1996 makes specific reference to the term ‘greengrocers’ apostrophe’ and states that its use had been condemned by grammarians since the mid-19th century but that it continued to appear ‘to the amusement of educated people’. This last comment seems to mark a shift towards making a distinction between those who know how to use the apostrophe ‘correctly’ and those who don’t, the latter perhaps being more concerned with selling their goods than worrying about matters of punctuation. As Beal notes, the ‘amusement’ of educated people seems to turn to ‘outrage’ in the 21st century with remarks concerning the use of the apostrophe often having undertones of snobbery.

Beal suggests that the apostrophe is something that is brought to people’s attention because it appears in notices in the public domain and that its so-called misuse may have come to stand for a set of values that an older generation fear losing, as if there had been a golden age when everyone knew and applied the ‘correct’ usage. As Beal demonstrates, that simply was not the case. Of course, she does not promote the use of the apostrophe with plural nouns but urges that their use should not be seen as a sign of illiteracy or stupidity either. As she argues, it is ‘a matter of proof-reading, not a matter of life and death’. What she says it does show however is that these minor matters (at least, minor to linguists) about language can loom large in the public’s consciousness, which in turn can inform us ‘about language and society at any given place and time’.
_______________________________________________________
Beal, J. (2010). The grocer’s apostrophe: popular prescriptivism in the 21st century. English Today 102, Vol.26/2: 57-63.