Good morning customer, how may I help you?

If you’ve ever gone to get a takeaway drink from Starbucks, you’re probably aware that they like to take your name and write it on the cup. If you’re someone whose name is even vaguely unusual or uncommon, you’re probably also aware of how infuriating it is when the poor barista mangles your name when trying to write it on the side. “Why do they even bother?”, you may have thought in such situations.

Whilst not entirely related to coffee shops, Anna Kristina Hultgren of the Open University looked into the politeness strategies of people working in call centres. Her aim was to compare the best practices with the actual interactions that call centre agents do. In particular, she noted an increasing trend of using vocatives – that exact trait where people constantly call you by your name – and considered how this could be accounted for.

Customer service was originally defined as being a “face-to-face” interaction, which orientated around what the customer desired from it, and the server’s obligation to fulfil the customer’s wishes. As Hultgren notes, the rise of call centres has changed this somewhat, along with what she calls the rationalisation of customer service interactions. This involves them being efficient, predictable, controlled, and calculable. (So yes, when you’re ringing up to query your phone bill and the person on the other end sounds like a robot, it is because they have to follow these four principles.) However, this still needs to be balanced with the fairly basic task of treating the caller like a human being. So how does this work? 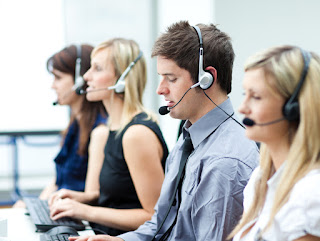 Madam, much as I would LOVE to spend another hour hearing about how your geraniums are doing, can you please just tell me what is wrong with your bill?

Hultgren looked at one particular call centre in Scotland, which specialised in pensions. She looked at the manuals that were provided to agents on training, and then researched the working practices of the call centre. This included on-site observations of the agents at work, a corpus of 79 call centre transactions, and interviews with call agents as well as their managers. Hultgren looked at 21 different rules that applied to the customer service interactions, dividing them into transactional  rules (ones which focused on the call being efficient and saving money) and interactional rules (ones which focused on the customer care element).

Naturally, given the rationalisation of the interactions, Hultgren found that, where the opportunity arose, transactional rules took priority. Of the interactional rules, the ones that were most frequently used were the aforementioned vocatives – giving the customer a “verbal handshake” by asking for their name, and then using it regularly throughout the interaction.

Why is this? Some of the other interactional rules included small talk and personalised greetings. The problem with small talk is the possibility that the agent will lose control of the conversation, and risk being too inefficient. Meanwhile, personalising greetings requires a lot of effort on the part of the agent, which they may not be able to expend when they have targets to meet. However, there is still the requirement to personalise the call, and the easiest way to do this is to use the customer’s name. Therefore, the use of vocatives sticks.

Hultgren theorises that this shows a new politeness strategy, called rationalised politeness, which has emerged from the economic, social and technological conditions of such interactions. When the overall goal is to make money, and the lack of face-to-face communication constricts the personal aspect of the conversation, there are limited ways for agents to engage with the customers.

It remains to be seen how much further this new form of politeness will spread. But if you're annoyed with Starbucks getting your name wrong every time, consider that you may well have to get used to it – this trend seems to be here to stay.