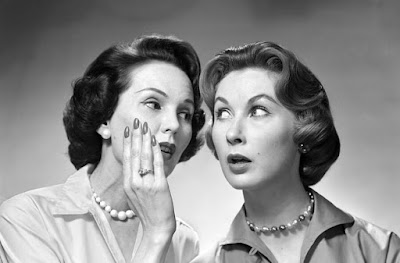 In the first part of our study, we replicated Coupland & Bishop's study (2007, summarised in an earlier blog post) to see whether the accent attitudes that people held 12 years ago still persist today. A similar study was conducted by Giles in 1970, giving us a further time point to compare our results.

We recruited a sample of over 800 participants aged between 18 and 79 via a market research firm. The group of participants was intended to be a representative sample of the UK population, so was balanced for gender and region (England, Scotland, Wales, and Northern Ireland) and included all major ethnicity groups.

Once participants had been recruited, they were asked to respond to 38 British accent 'labels', such as 'Estuary English', 'Received Pronunciation', 'Multicultural British English', and 'Birmingham English'. You can listen to some of these accents here. The participants were asked to rate each accent label on a scale of 1-7 - where 1 is the lowest and 7 is the highest - for the prestige and pleasantness of the accent.

After they had completed the survey, we collected social information about the participant, including their gender, ethnicity, age, region of origin, highest level of education, occupation, English accent, languages spoken. We also asked them to complete a short questionnaire about their exposure to different UK accents, the diversity of their own social networks, their beliefs about bias in Britain, and respond to a series of questions designed to measure how much they were concerned about being perceived as prejudiced. 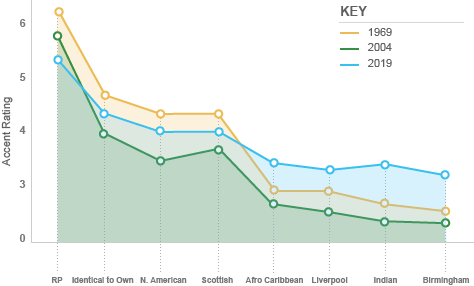 As the image above shows, when compared with Giles' results in 1969, Coupland and Bishop's results in 2004, our findings (2019) demonstrate that whilst there are some minor differences, overall, attitudes to accents in the UK remain fairly stable. Standard accents, such as Received Pronunciation (RP) remain very highly rated, whereas ethnic and urban accents, such as Birmingham English, are rated much less favourably. These findings appear to be stable across the three time points.

Want to replicate this study?

We've developed a series of Language Investigations and Teaching Units that helps students and teachers develop a research project of their own! Head over to Teach Real English! to access these resources.


However, all is not lost it seems. Although we see similar patterns across the three studies, we do see a gradual improvement in the ratings of the accents that are rated the lowest (Afro-Caribbean, Liverpool, Indian, Birmingham). In fact, our 2019 study reports quite the improvement in overall ratings of these accents. It's therefore possible that people view these accents much more positively than they did 50 years ago.

However, this study examines only responses to 'accent labels'. What would we find if we played actual audio recordings of these accents to participants? Would we see the same results? In the next blog post, we introduce the findings from the second part of our study. In the meantime, you can find our more about the project by visiting the project website.

Did you know that as well as the 'Research Digest', we also maintain the 'Teach Real English!' site?

Our site is an archive of spoken English Language Teaching resources that have been developed by Linguists at Queen Mary University of London. Our website includes:

The materials have been designed for teachers of GCSE and GCE A-Level English Language, but they may be useful for anyone involved in teaching spoken English language.


If you have already used our resource, we'd love to hear your feedback! We are regularly asked to report on usage of the materials we create, so would greatly appreciate you filling in our survey.
Posted by Jenny Cheshire at 10:50 No comments:

There ain’t nowt wrong with accents

What do you think of when you hear someone speak with a Brummie accent? How about when somebody speaks with a West Country accent? Do you think that some accents are more attractive or prestigious than others? If so, it’s possible that your judgements of these accents are influenced by accent bias.

As part of the Accent Bias project led by academics at Queen Mary University of London and the University of York, over the next few weeks we’ll be uploading a series of Digest posts that discuss the effects of accent bias.

In the first post of the series, we focus on a 2007 study by Nikolas Coupland and Hywel Bishop that investigated how people perceive different types of British accents, looking specifically at whether some accents were evaluated more positively than others.


In their 2007 study, they report on a BBC survey that collected 5010 respondents’ evaluations of 34 different accents. To assess these evaluations, they created an online survey where participants where asked a series of questions about the prestige and pleasantness of the 34 accents. This included asking participants direct questions such as “How much prestige do you think is associated with this accent?”, and “How pleasant do you think this accent sounds?”. The participants rated their judgements electronically via a digital survey by clicking a seven-point rating scale, where 1 is low rating whilst 7 is high rating. This is what is referred to as a 'label study' in that participants were not asked to listen to a recording of the accent, but were simply asked to respond to different accent 'labels', such as 'Asian English' or 'Southern Irish'.

Participants also were asked to indicate where in the UK they were from, how old they were, and their gender. The researchers also asked a series of questions about whether the respondent liked hearing different accents to test whether their attitudes towards accents and dialects influenced their ratings of the different accent labels.

Coupland and Bishop find that, for social attractiveness, accents such as Standard English, Southern Irish, and Scottish are generally positively evaluated, whilst accents such as Birmingham, South African, and Glasgow were typically down-rated – that is, they score much lower. For prestige, however, they observe a slightly different pattern. Received Pronunciation (or the ‘Queen’s English’) scores much higher in terms of prestige than it does for social attractiveness. Whilst accents such as Birmingham and Asian English score poorly across the two different scales.

Whilst these ratings reveal more general trends of the social evaluation of different UK accents, Coupland and Bishop suggest that these evaluations may be influenced by the respondents' social characteristics, such as whether they are male or female. Focusing just on ‘prestige’, on the whole, Coupland and Bishop find that women are more likely to evaluate a given accent as prestigious than men. They also find that where the respondent is based in the UK appears to play a role in their evaluation of a given accent, with participants more likely to evaluate in-group accents as more favourable than others. In other words, Scottish speaking participants were more likely to evaluate Scottish accents more positively than respondents from other parts of the country. Similarly, they also observe that the respondents’ age is likely to influence their evaluation, with the oldest age group tending to show a preference for their own accents than all other groups. Lastly, they observe that the more liberally-minded respondents who indicate that they appreciate accent variation were more likely to rate non-standard accents as more prestigious than their peers.

So, what does this all mean? Well, Coupland and Bishop note several implications of this study. The first is that language use is influenced by ideology – that is a widespread system of ideas and values that governs a particular concept or social issue. For instance, they observe that there is a general tendency to rate ethnically linked accents (Asian and Afro-Caribbean) and some of the urban vernaculars (Birmingham, Liverpool, Glasgow) as lower in prestige and attractiveness than non-ethnically linked and rural accents. They argue that this is because there is a widespread belief that people should ‘speak properly’ and so accents that are further away from more ‘standard’ varieties are typically perceived to be less attractive and less prestigious than ones that are closer to the standard.

Whilst these findings may not at first seem very encouraging for speakers of non-standard varieties, Coupland and Bishop suggest it seems that there is seems to be a shift towards embracing more liberal attitudes towards accent variation, with younger respondents and those claiming that they like hearing different accents more likely to evaluate non-standard varieties as more prestigious and more socially attractive. So, it seems that although some people might think of certain accents as more attractive or prestigious than others, perceptions are gradually changing.

Given the fourteen or so years since Coupland and Bishop conducted their study, it’s worth considering whether this liberal outlook has continued. Over the next couple of weeks, we’ll be focusing on the Accent Bias in Britain project which, among other questions, sought to investigate this issue. In the meantime, or more information on the project, you can visit the Accent Bias in Britain homepage. You can also find further educational resources, including a Language Investigation and a Teaching Unit on our Teach Real English! website.