Content note: this article contains some references to homophobia.

No one could argue that LGBT rights in the UK have not made progress over the last decade or two. With the introduction of the Gender Recognition Act in 2004 and the successful campaign for same-sex marriage in 2013, today LGBT people have more and more protection under UK law. However, there is still some way to go before those who identify as LGBT experience the same levels of equality afforded to the rest of the population. Given this struggle for total equality, it is perhaps unsurprising that many of these themes emerge in the way LGBT people present themselves, including how they use linguistic features to mark aspects of their identity. 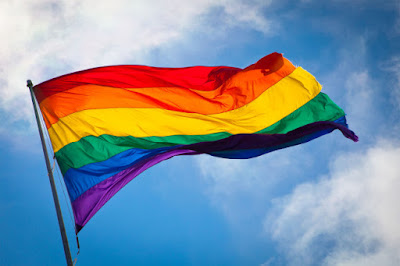 Lucy Jones of the University of Nottingham did a study on a group of LGBT youths, looking particularly at the way that they used language to construct their own identity. Jones noted that, with many of the above advancements, came a culture of what is known as homonormativity – the belief that sexual and romantic attraction should be between man and woman, as opposed to those of the same sex. This belief influences the way LGBT people live their lives and members of the community feel that they are under pressure to assimilate (i.e., become more similar to) mainstream society and adopt heterosexual or cisgender social norms.

In her study, Jones wanted to see if this had an impact on the way that the youths discussed their identities.

Her research took place in a youth group that specifically supported those who identified as LGBT or who questioned their gender or sexual identity. Jones spent four months with the group, and did several interviews with members. She ended up taking data from five members, all of whom were white and cisgender, and identified either as lesbians or gay men.

Jones identified three ways in which these young people negotiated their identity. The first way was through the rejection of stereotypes – one participant deliberately distanced himself from the idea of a “stereotypical gay camp man”, rejecting the idea of “flaunting around the place”. The participant also compared being gay to horse-riding, saying that it would be silly to define people by their hobbies. Jones argued that this creates a disconnect between being gay and performing a gay identity, and hence deliberately distancing themselves from it.

The second way was through the discussion of “othering” by their heterosexual counterparts. When discussing the importance of Gay Pride Marches, the teenagers aligned themselves with gay people, and positioned themselves in opposition to heterosexuals by using the pronouns “we” and “they”. When quoting heterosexual acquaintances, one teenager repeatedly used the second person pronoun, but in the plural, such as “why do you have Pride?”. By reporting their speech in this way, the respondents show how they become ‘othered’ by heterosexual peers.

Finally, as might be expected following the above, negotiating the homophobia that they experienced formed a considerable part of how they constructed their identity. The teenagers reported that they had experience multiple homophobic incidents. Jones interprets this as a possible cause of why these individuals sought to distance themselves from overtly gay stereotypes.

Ultimately, what Jones’ paper shows is that, despite the advances that legislation has made, LGBT youth still have very difficult experiences that lead them to construct their identity in ways that adhere to mainstream norms and make themselves more like their heterosexual peers. Through an analysis of language, we can see that we have a long way to go to help LGBT peers feel accepted.

Glossary - Cisgender: Someone whose gender identity matches the sex they were assigned at birth

Does Gaga ‘live for the applause’? Or, is it more of a ‘Poker Face’?

As one of the best-selling pop artists of our time, Lady Gaga is a name few would fail to recognise. From ‘Poker Face’ to ‘Telephone’, her artistry has earned her a level of notoriety comparable only to a few other music legends. Along with her success, she’s built a loyal fanbase that she affectionately refers to as the ‘Little Monsters’. At shows, she often invites her ‘Little Monsters’ on stage, whilst at other times, she’s surprised her fans by appearing at a movie premier. Here, Lady Gaga appears to navigate between her identity as an international superstar whilst simultaneously appealing to her fans to recognise her as an ‘ordinary person’. But, how does Gaga manage these apparently conflicting identities and what linguistic devices does she use to achieve this? In her 2018 paper, Mary-Caitlyn Valentinsson decided to find out:

To examine the ways in which Gaga navigates the ‘ordinary person’ and ‘celebrity superstar’ identities, Valentinsson examines tweets sent by Gaga aimed at her fans and transcripts taken from media interviews with Gaga.

Central to Valentinsson’s analysis are the concepts of stance and stance-taking. These two terms describe two aspects of communication. The term ‘stance’ refers to the way that people align or position themselves in relation to some object, person or idea. So when a speaker expresses their attitude towards something, that speaker is taking a stance. The notion of stance-taking refers to the actual process of making that alignment, which is usually achieved through communication. For instance, if you said, ‘I don’t like cheese’, you'd be taking a stance that you ‘don’t like the dairy goodness of cheese’. The Stance-taking bit would be you actually saying those words.

To examine Lady Gaga’s stances in relation to her fans and journalists, Valentinsson first turns to Gaga’s Twitter account where she observes that Gaga often creates a stance of alignment with the ‘ordinary people’. She does this through a number of linguistic strategies. For instance, in one tweet aimed at her fans, Gaga uses terms usually associated with the family (‘mommy’, ‘kids’, ‘mother’) to take a stance of intimacy that allows her to align with her fans. In another tweet, which references the two awards that Gaga won at the People’s Choice Awards, she uses the third-person pronoun ‘we’ in the sentence: ‘we won two people’s choice awards’ to include her fans as recipients of the awards. In other contexts, Gaga uses the @ function of Twitter to ‘speak’ to her fans directly, referencing an awareness of issues effecting her fans in real life. Together, these ‘strategies’ allow Lady Gaga to create a stance of alignment with her fans, rejecting her celebrity status, therefore presenting herself as an ‘ordinary person’.


In interviews with journalists, however, Valentinsson observes an altogether different set of strategies used by Gaga. In these contexts, Gaga adopts a relatively confrontational stance. She does this by refusing to answer questions she deems inappropriate or correcting journalists’ comments about her stage performance. For instance, in one interview, asked whether the sexual references in her songs would negatively influence her record sales, Gaga responds by confronting the interviewer with her achievement of selling 4 million records. Valentinsson argues that, by taking these stances, Gaga explicitly creates a stance of disalignment with the ‘media enterprise’ and reinforces her earlier identity as an ‘ordinary person’.

Concluding, Valentinsson argues that Gaga maintains an ‘ordinary persona’ by engaging in stance taking moves that emphasise her alignment with her fans above all other audiences. So, it seems, at least Gaga is not a ‘Judas’ afterall and she’s certainly not as ‘Shallow’ as the media would like you to believe…

Valentinsson, Mary-Caitlyn (2018). Stance and the construction of authentic celebrity persona. Language in Society 47, 715–740.