It's about THIS big 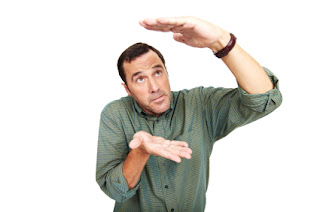 There are many ways we can communicate with each other.  During face-to-face conversation, we use more than words to communicate meaning and emotion.  For example, we can use different types of eye contact and use our hands to make a variety of gestures.

These types of non-linguistic communication, when taken together, are often referred to as ‘body language’.  But how does what we say relate to the gestures we use?  Do we sometimes modify our gestures, depending on the types of feedback we get from the person we’re talking to?

Judith Holler and Katie Wilkin designed an experiment which aimed to investigate what they call ‘co-speech gestures’.  These are gestures (i.e. hand and arm movements) which are directly related to what is spoken at the time they are used.  For example, when saying something like “he just drove away”, a gesture such as a hand sweeping away from the body may be used.   They wanted to investigate whether the amount of gestures increased when a speaker received feedback (such as questions) from the addressee during storytelling. In addition, the experiment was designed to look at how gestures might be modified following feedback.  For example, if describing an object, you might say “it was oddly shaped” while making a low, rough gesture with your hands to approximate what you’re describing.  However, if the person you’re talking to questions “how was it shaped?”, your gesture is likely to be repeated, but in a higher position and a more accurate way in order to give more detail and meaning to your description. Indeed, Holler and Wilkin identified four ways in which a gesture may be modified:

In addition to these, they wanted to investigate the use of ‘deictic markers’ and how their use relates to a speaker’s gaze.  For example, the use of ‘this’ in “it was this big” coupled with a shift in the speaker’s gaze to their own gesture signals to the addressee that they should also look at the gesture for the information it contains.

The experiment involved 28 British English females all telling a story relating to a silent film they were required to watch.  They then told the story of the film to one of the researchers (though they didn’t know who she was at the time), while the researcher asked four pre-planned questions at specific points of the story in addition to any natural behaviour and feedback.

The results showed that there were no differences in the amount of gestures before and after feedback, except when the pre-planned question was one which aimed to get confirmation from the speaker (i.e. a ‘yes’ answer).  In this context, the gesture rate decreased after the feedback.  In addition, 76% of gesture pairs before and after the four feedback questions were judged to be ‘more communicative’ after feedback with respect to the criteria above, particularly on the dimensions of precision, size and space.  These results, Holler and Wilkin suggest, show how gestures are designed for the recipient and are modified to give information which complements what is being said.