“I were out with Lucy last week. She were in a right good mood.” 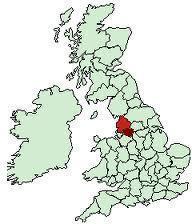 The Lancashire and Greater Manchester regions of the British Isles
Do you use were in expressions like those above? Yes? Then the chances are that you are from the northwest of England. Historically, the use of ‘nonstandard’ I were and s/he were was more widespread and was even found in some counties in the south of England, such as Suffolk and Norfolk, but these days this dialect feature seems to be restricted to northern varieties. In the rest of the British Isles people are more likely to say I was, she was (these are of course also the standard English forms) but they will also use was in plural forms like we was. So when people in the rest of the country are saying was, why does the use of the were variety persist in the north?

Researcher Emma Moore has investigated patterns of variation in speech among teenage girls in Bolton (once part of Lancashire but now included in the Greater Manchester area due to boundary changes) and found that the use of nonstandard were is still a robust feature in their dialect. Moore suggests that it continues to exist there because some of the girls use it to signal their localness to the area. The situation is more complicated than this though. This detailed ethnographic study follows the girls at school over a two-year period, starting when they were aged 12-13 and ending when they were 14-15 years old. Moore collected around 50 hours of speech recordings. Over this span of time she was also able to study the girls’ personal appearance and style, the people that each of them spent time with, the activities that they engaged in and the girls’ attitudes to their own membership of groups and towards other groups. From this information Moore identified four groups or ‘Communities of Practice’ (CofP) within the school; the Populars, who engaged in rebellious activities such as drinking and smoking and generally had an anti-school attitude; the Townies, a breakaway group who emerged from the Populars and who started to engage in even riskier activities such as drug-taking and sexual activity; the Geeks, who were ‘institutionally orientated’ and took part in school activities such as the choir and school orchestra and finally, the Eden Valley girls, a group of girls who came from a desirable home area, were also school-orientated and who engaged in activities such as dancing and shopping. All of the girls came from ‘upper working class’ or ‘lower middle class’ social backgrounds, reflecting the relative prosperity of the research location.
Moore’s analysis of the data shows that there are certain internal (linguistic) contexts where speakers are more likely to use nonstandard were. For example, tag questions at the end of clauses as in ‘it was at Beverley’s party, weren’t it?’ and indefinite pronouns such as everyone in the expression ‘everyone were touchy-feely’ are likely to attract the use of nonstandard were. But it is the analysis of the external (social) constraints that shows the more fine-grained uses of nonstandard were.
Firstly, the seven Eden Valley girls used standard was almost all of the time. This was the only CofP to have speakers who were exclusively from the higher social group. Furthermore, the distance of their home area from the school precluded them from maintaining friendships with girls outside of their home village and their social engagements tended to be within high status networks with individuals from a wide geographical area. So while the social practices they engaged in patterned with their use of standard English forms, the CofP itself was constrained by wider social circumstances, particularly social class. This of course corroborates with many other studies which have shown that the higher up the social scale a speaker is, the more likely a speaker is to use standard forms.
However, the other three CofPs all draw members from both social class groups. The use of nonstandard were among these adolescents might therefore be seen as a reflection of their social practices, although this is not quite straightforwardly so and other factors also play a role. For example, the Geeks generally disfavour the use of nonstandard were and this may be because they engage with the institutional norms of the school and conform to using standard forms.  However, four (out of a total of fourteen) of the Geeks do have high rates of nonstandard were. On closer inspection, these four speakers all come from the lower social class group and have at least one parent born in Bolton. In these cases, their strong local ties and obligations outside school may exert more influence over their language use than their interactions within school. Similarly, the Populars neither favour nor disfavour the use of nonstandard were but three (out of a total of fourteen) of the individuals in this group have no use of nonstandard were at all. These three speakers are all from the higher social class group and their wider social engagements also seem to exert more influence over their speech than their engagement with practices associated with the Populars group.
It is the Townies group which highly favours the use of nonstandard were. The four Townies members are drawn from the two social class groups; two from the upper working class group and two from the lower middle class group. All four have at least one parent born in Bolton. What singles these speakers out from the others is not only their engagement in more rebellious social practices but also that their social networks include boys from some of the most working class areas of Bolton where the maintenance of this dialect feature is perhaps more steadfast.
What is clear from this paper is that nonstandard were is alive and well in this northwest area but that there is not one single explanation to account for its use. Engagement in social practices was found to be important but clearly there is a complex interaction of both linguistic and social factors. Moore concludes by stating that this dialect feature will be maintained as long as it ‘maintains an active role in sociolinguistic practice’.
_____________________________________________________

This summary was written by Sue Fox
Posted by Sue at 10:17