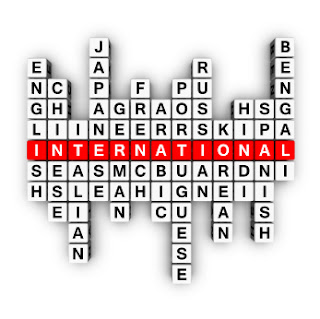 The spread of English across the world has been viewed in terms of three concentric circles, which are traditionally referred to as the Inner, Outer and Expanding Circles.  The Inner Circle (IC) refers to countries where English is viewed as a native language, often considered the ‘traditional’ bases of English: the USA, UK, Canada, Australia and New Zealand. The Outer Circle (OC) refers to countries to which English spread as a result of colonialism such as India and parts of Asia and Africa. Here, English has been institutionalised in educational, political and judicial systems and is a second language to many of its speakers.  The Expanding Circle (EC) is where English is a foreign language which is considered important to learn in its international, business and digital capacity. As English becomes more widely used in an international context, linguists have simultaneously become more interested in documenting what is happening to variation in its usage across the three circles.

One way of doing this is by studying the use of uncountable nouns.  These include advice, knowledge, milk and information and are traditionally described as nouns that we literally can’t count and therefore have no -s to make them plural, as opposed to the countable nouns chair(s), book(s), pen(s) or apple(s) for example. The ‘incorrect’ use of these uncountable nouns has long been cited as one of the main differences between native IC speakers of English and those in the OC and EC, who have more of a tendency to pluralize them (as advices and milks for example).

Christopher Hall, Daniel Schmidtke and Jamie Vickers decided to study this assumed distinction more closely with a view to seeing whether there was any variation in uncountable noun usage between the outer and expanding circles. To do this they extracted their data from two main resources.  The first was the Vienna Oxford International Corpus of English, or VOICE, a spoken language database which contains just over one million words from non-native European English speakers.  The second was the World Wide Web, a fantastic resource for research into international varieties of English, especially as it’s full of ‘ill-formed’ language that prescriptive linguists really don’t like, just perfect for this study! By using the advanced settings of the Google search engine, Hall, Schmidtke and Vickers were able to search OC domains like Malta (.mt) and Hong Kong (.hk) and EC domains like Thailand (.th) and Iceland (.ic).  They scoured both VOICE and the WWW for examples of the ‘incorrect’ plural forms of uncountable nouns.

They found that the pluralisation of mass nouns was actually pretty uncommon, although obviously more frequent than native IC Englishes where it is almost entirely absent.  They also found that where uncountable nouns were used in the plural form, it was across a range of mainly OC settings.  This was a curious finding since we would expect speakers in countries where English is an official, widely-used  second language to use it more ‘correctly’ or at least more in line with native speakers of the IC.

Hall, Schmidtke and Vickers are keen to point out that, although frequent when compared to IC Englishes, plural forms of uncountable nouns are unlikely to emerge as new forms in OC or EC Englishes as overall they are quite infrequent, and this usage probably doesn’t warrant as much ‘fuss’ and attention as prescriptive linguists have given it in the past.

Nothing like some good researches to expand our knowledges, don’t you think?

This summary was written by Gemma Stoyle
Posted by Jenny Cheshire at 11:38