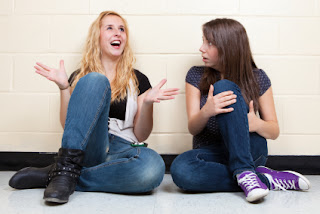 The quotative system, particularly in teenage speech, has received a lot of attention from linguists in recent years (for other summaries related to this topic click ‘Quotatives’ in the left-hand bar). Much of the research has focused on the frequency rates and the linguistic contexts in which reporting verbs such as SAY, GO and THINK are used, with many studies focusing on the more recent newcomer BE LIKE, which has emerged among English varieties across the globe.

A further competitor within the quotative system, however, is the ‘zero’ or ‘null’ quotative, which is the focus of a study by Ignacio M. Palacios Martinez. These are instances where direct speech is introduced without the use of any introductory verb or attributed speaker. Palacios Martínez provides the following example where Speaker A introduces direct speech without any introductory verb (Ø = zero quotative) but the context and the mimicking voice provide Speaker B with the clue that these are the words of the male protagonist of the film being discussed:

Palacios Martínez compared the speech of Spanish (mainly from Madrid) and English (mainly from London) teenagers from similar social backgrounds and found that zero quotatives represented 8% and around 18% respectively of all quotatives used, demonstrating that it is a robust competitor within these quotative systems.

Furthermore, the Spanish and English teenagers were found to use zero quotatives in similar ways. The first main context identified as favoring the use of a zero quotative was when a sound or non-lexicalised word was used, as in ‘grrr, grrr, grrr’ to provide a listener with an animal sound when telling a story about a bear.

The second main use of zero quotatives was connected with mimicking a voice (as in the above example) or performing in a new voice, for example for dramatic or humorous effect. Within this category, Palacios Martinez found that the teenagers imitated a wide variety of accents, including African, Jamaican, Chinese, French and Swedish, usually done to criticize or make fun of another person or to sound funny and make their interlocutor laugh. The teenagers also emulated famous people or used voices typical of babies or young children.

An interesting use of the zero quotative was, as Palacios Martínez describes it, to express disgust and disagreement with an interlocutor. He provides an example of a girl repeating a disagreement that she had with a boy in her class about a football team, where she repeats what the boy says and what she says in return but without the overt use of an introductory verb in the case of either speaker.  The fact that conflicting views are presented seems to make it clear that different people are being represented in the narrative.

An interesting observation made by Palacios Martínez is that the more involved a narrator becomes with his/her story and as the story becomes more dramatic, the more likely is the use of explicit quotatives to be abandoned and zero quotatives used. This is perhaps also connected to the fact that as a story progresses the listener comes to know the characters involved and there is not such a need for overt dialogue introducers.