Children’s response to irony with irony 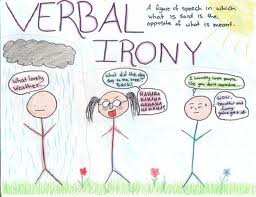 Children as young as 7 years old can produce verbal irony
When a person we are with produces an ironic remark it is quite usual for us to respond to that comment with our own ironic remark. The comment ‘Beautiful weather, isn’t it?’ made in the middle of a summer thunderstorm might elicit the response ‘Yes, I’ve put my sunscreen on so that I don’t get sunburn’. This type of response can be termed ‘mode-adoption’ to reflect the way that a speaker is continuing the conversation’s ironic tone.
We know that irony has a number of different functions in verbal communication. It allows a speaker to be humorous, it can be used to mock or tease or it can soften (or intensify) a hurtful comment. The most common form of irony, ironic criticism, is characterised by the use of a positive statement to convey a negative meaning as in the remark about the weather in the above example. Less usual is an ironic compliment, saying something negative to mean something positive, as in the sentence ‘This tastes so horrible’ from someone who is clearly enjoying a delicious cake. Being able to understand verbal irony and having the ability to produce ironic remarks reflect advanced social reasoning. These are useful social tools – the skilful use of irony can demonstrate a high level of social competence. But at what age do we begin to acquire these skills?
Children begin to understand irony from a young age. At around age 5-6 they will understand that a speaker holds a belief contrary to the literal meaning of what has been said and at around the age of 9-10 they will develop an appreciation of humour in irony. Very little is known, though, about children’s ability to produce ironic remarks themselves. To bridge this gap in knowledge, researchers Whelan and Pexman have conducted experiments to investigate the development of children’s understanding and ability to produce irony, and in particular the development of ‘mode-adoption’, the ability to produce verbal irony in response to others’ ironic remarks.
In the first of two experiments, 65 children aged between 7 and 11 years old were presented with 9 short stories played in random order on a laptop. Each story ended in a negative outcome. After 6 of the stories the experimenter made an ironic criticism ‘What a wonderful way to end the day’ and after 3 of the stories the experimenter made a literal remark ‘What a terrible way to end the day’. After the experimenter comment the child was given the opportunity to voluntarily respond to the experimenter’s remark and if they didn’t respond voluntarily, they were prompted to do so. The experimenter then asked the child some brief comprehension questions. In this experiment the children of all ages were very successful in understanding the speaker’s true belief when ironic criticisms were made. The results also showed that children as young as 7 mode-adopted by responding with an ironic remark. However, mode-adoption increased with age – the 11 year olds were significantly more likely to engage in mode-adoption than the 7 and 9 year old age groups.
The second experiment was designed to determine when children start producing irony in response to ironic compliments. It is generally considered that an understanding of ironic compliments emerges later than an understanding of ironic criticism. In this experiment, 68 (different) children aged 7-11 were similarly shown 9 short stories with the same story topic as for the first experiment except that the story outcomes were positive. At the end of each story the same experimenter used either an ironic or a literal compliment and then followed the same procedure as for Experiment 1. In this experiment the results showed that the older children were able to appreciate the speaker’s belief more accurately than younger children although the difference did not reach significance in the statistical analysis. This experiment also showed that children as young as 7 mode-adopted and responded to ironic compliments with an ironic remark. However, there was no development in mode-adoption with age; mode-adoption occurred among the 11 year olds but not the 9 year olds.
The researchers’ take-home message from these experiments is that children ‘can, and sometimes do, respond to verbal irony by producing ironic utterances of their own’. Like adults, they share the tendency to mode-adopt in conversation and this starts to develop quite early on. The experimenters admit that their approach may not mirror what happens in everyday conversations and suggest that observation of naturalistic data would provide an ideal follow-up study.
_________________________________________
Whalen, J. and Pexman, P. (2010). How do children respond to verbal irony in face-to-face communication? The development of mode-adoption across middle childhood. Discourse Processes 47: 363-387.
doi: 10.1080/01638530903347635

This summary was written by Sue Fox
Posted by Sue at 11:47