Quoting across the generations 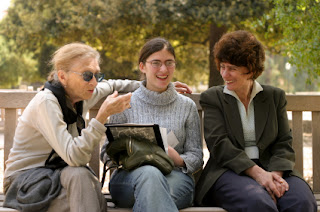 Would you guess the Newcastle speaker of the extract below to be over or under the age of 40? And what are the clues that help you decide?
One of our governors (…)  phoned the head and he said “there’s a model in the engineer’s department of the Civic Centre.. do you think Patrick would want it?” . so the head rang me up and he said “ring so-and-so in the city engineers and ask about this model . so I rang up and I said “I believe you’ve got a model of the Civic Centre” . he said “aye” . he said “do you want it?”
If you guessed that the speaker was over 40, you’d be right. Apart from the topic of the conversation, using mainly SAY to introduce direct reported speech is typical of older speakers. There are 5 quotative expressions in the extract, and each of them is he said. Young people today might be more likely to introduce the quote with he was like or he went.
If we’d asked you this question back in the 1960s, though, you may have found it harder to decide. Isabelle Buchstaller’s recent research into quotative expressions across the generations shows how the quotative system has changed in Tyneside, north-east England, over the last 50 years from one where all speakers mainly used SAY to introduce direct reported speech (as in the example in the box) to one with a richer set of quotative expressions.
Buchstaller traced the way that two new quotatives, BE LIKE and GO, entered the quotative system. (The system as a whole includes THINK to introduce reported thought as well as other, less frequent, quotatives such as SHOUT and “unframed quotes” where speakers just quote what someone said without any quotative expression at all). She used three separate sets of recorded speech from people in Tyneside, recorded during the 1960s, the 1990s, and in 2007-2009.  Each set was divided into younger speakers (younger than 40) and older speakers.
BE LIKE and GO did not occur at all in the 1960s data. By the 1990s, they were both used, though not very often. SAY was still the quotative expression that occurred most often. When people chose to use BE LIKE it was mainly with first person subjects, to report what the speaker was thinking: for example, I was like “what?” where what is not something the speaker said but shows that they were feeling surprised. Interestingly, research in other places has also found that this is how BE LIKE is used when it first enters the quotative system.
By 2007, BE LIKE had rapidly increased in popularity in Tyneside and was now the favourite form for younger speakers, especially younger women and middle class speakers. They no longer used BE LIKE to report what they were thinking, but mainly to report what had been said, both by themselves and by other people.
An unexpected finding concerned the tense of the quotative expression. In the 1960s, when SAY was the main quotative, people used it in a wide range of tenses – so, not only he said but also he would say, he was saying, he’d said, he used to say, and more. By 2000, though, young people were using SAY mainly in the ‘conversational present tense’, to refer to something that was said in the past as if it was being said now, and so making their account of what someone said more vivid (saying, for example, he says “do you want it” instead of he said “do you want it”). BE LIKE and GO, on the other hand, were used mainly in the simple past tense (he was like and he went). Not only that, young people used BE LIKE and GO more often in narrative contexts, when they were telling someone about something that had happened, in the form of a little story. They reserved SAY for other contexts, when the speech they were reporting was not part of a story. Older speakers continued to use SAY in all types of context.
Buchstaller’s research shows, then, that the addition of two new quotative expressions can spark off other, more subtle changes to the quotative system.  In Tyneside, as younger speakers juggle with a richer number of choices to report what someone has said, they give each quotative expression a preferred tense and a preferred context.
___________________________________________________
Buchstaller, Isabelle (2011) Quotations across the generations: A multivariate analysis of speech and thought introducers across 5 decades of Tyneside speech. Corpus Linguistics and Linguistic Theory 7 (1): 59-92
doi: 10.1515/CLLT.2011.004
This summary was written by Jenny Cheshire
Posted by Sue at 10:00