Who makes a language change begin? 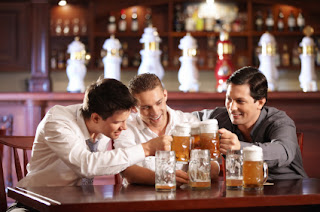 Are gregarious people linguistic innovators?
What kind of people are the first to use a new language feature and so kick off a change in the language? As Derek Denis points out, we can’t predict a language change before it starts, so not much is known about who introduces language innovations.
However, a set of interviews from York, England, recorded about 14 years ago, unintentionally captured the start of a change in general extender forms in spoken English. This allowed Denis to investigate who were the first users of the new forms. He found that it is outgoing sociable people with many friends who were unwittingly responsible for the start of a change.
General extenders are forms like and stuff like that or simply and stuff that often indicate that the previous word is part of a set that the addressees and the speaker both know about. In this way they extend the meaning of that word without having to specify all the members of the set. For example, and stuff in I used to wear punk earrings and stuff refers to a set of things that people wear when they want to look like a punk (see our previous posts on general extenders, such as http://linguistics-research-digest.blogspot.com/2011/10/young-peoples-language-and-stuff-like.html or http://linguistics-research-digest.blogspot.com/2012/03/spoken-language-and-stuff-like-that.html )
In the York recordings and stuff is the favourite general extender form for the younger generation. Older people prefer other forms such as and things. A few people stand out, though, as using and stuff far more often than others of the same age. These people, then, must be the innovators – the people who started the change.
There were six of these individuals, with ages ranging from 62 to 22, though most were in their early twenties. Three were male and three were female. Their jobs and the number of years of education they had completed positioned them towards the centre of the social class spectrum (for example, one woman was a waitress, another a psychiatric nurse).
What they had in common was that in their interviews much of the discussion revolved around their friends and their social circles. Denis calculated a simple index of gregariousness based on the number of times each speaker mentioned the word friend in their interview. He checked that the index was valid by looking carefully at what was discussed during the interviews. Those with high gregariousness levels tended to talk about their different sets of friends or about community groups to which they belonged. By contrast, those with low gregariousness levels tended not to belong to groups, did not talk about other people much, and were sometimes difficult to interview, saying that they “didn’t have much to talk about”.
There was a close relationship between high levels of and stuff usage and high levels of gregariousness. Most of those who were rated low in terms of their gregariousness did not use and stuff at all. Denis cautions that this does not mean that everyone with a high rate of gregariousness is a linguistic innovator: not all of those with high levels of gregariousness (by implication, a lot of friends) used and stuff, but all those who used and stuff much more frequently than others of their age group had high levels of gregariousness. Quite simply, the more gregarious a person is, the more likely they are to talk to many people, often, and the high number of different interactions means that these people may hear novelties and then tend to use them themselves.
Denis compared the type of people who were and stuff innovators in York with what previous research has discovered about the type of people who lead a change once it has got underway in a community. A striking difference is that whereas the leaders of an ongoing change are usually women, the innovators of the new change analysed by Denis were both women and men.
Men too, then, can drive language change, depending on the change in question but also, apparently, depending on how gregarious they are.
____________________________________________________
Denis, Derek (2011) Innovators and innovation: Tracking the innovators of and stuff in York English. University of Pennsylvania Working Papers in Linguistics 17 (2): 61-70.
http://repository.upenn.edu/pwpl/vol17/iss2/8
This summary was written by Jenny Cheshire
Posted by Sue at 00:19