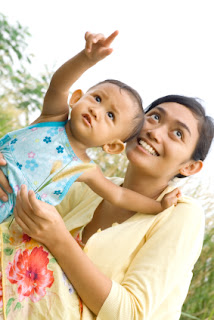 Pointing is one of the first communicative devices that children acquire between 9 and 12 months
How do children’s first words come about? Are children passive receivers of their caregivers’ linguistic input? Many studies have focused on the input of the parent and regard a child’s naming of objects and actions at the age of around 12 months as the natural outcome of the frequently occurring utterances based on highly routinized activities such as eating and washing. Others have looked at pre-verbal interaction such as joint visual attention between parent and child to physical objects as a pre-requisite for learning to name objects. According to this view, the child and parent both look at the same object, the parent then names it and the child subsequently acquires a shared understanding of meaning. But what about children’s actions and their first utterances – what role do these things play in acquiring the shared meanings of words and in the production of first recognisable words?
Researchers Laakso, Helasvuo and Savinainen-Makkonen, all working on a project of Child’s developing language and interaction, have been analysing the pointing actions of young children used alongside their first utterances to see how these things relate to the shift from non-verbal communication to actual speaking. They have also been examining the responses of parents to the child’s pointing and first utterances in order to see how they are sequentially organised.
The team analysed approximately 12 hours of parent-child interactions comprised of 23 videotaped recordings of four children aged around 12 months. They were particularly interested in gazing, proto-words (these are the first articulated word-like structures which do not yet have a referential linguistic meaning) and pointing. They found that all the children used pointing to initiate interaction with their parents and that the children’s gestures were mainly accompanied by proto-words or other sounds. However, although the proto-word remained the same in many cases, the parents did not always interpret them in the same way. The different interpretations seemed to be affected by the context and the accompanying non-verbal activities.
Sometimes the interaction initiated a naming sequence. The child would look and point at something while uttering the proto-word and the parent would then say something along the lines of ‘yes’ (to indicate that the caregiver understands the child) and go on to name the possible thing that the child was pointing at. For example, in one sequence the child utters a proto-word while she looks and points towards a window where there are two butterflies hanging for decoration. The parent says ‘yeah, they are those butterflies there in the window’. These child-initiated naming sequences consisted of two parts – the initiative action by the child and the interpretation supplied by the parent.
On other occasions the child’s actions were interpreted as a request for something by the parent. The researchers offer two examples. The first is a meal time where the child rejects the offer of food from the mother and turns instead and, while uttering the proto-word, points towards the sink. The mother sees this as a request for water and when she gives the child some water, the child is satisfied. In the second example, the child points and leans towards a flower, trying to reach it. The mother treats the action as a naming referent but the child clearly wants to have the flower and so rejects this interpretation by crying. These examples are considered to be interactive three-part sequences with the child’s request, caregiver’s response and the child’s acceptance/rejection.
The researchers emphasise that in contrast to studies that stress the input of the parent in language acquisition their study shows that it is most often the child who initiates the interaction by using proto-words and pointing. The responses of the parent then provide a model of adult production of the words and meanings that the child is trying to express. This is the model for the child’s first words which gradually emerge from the proto-words. Importantly, this work nicely captures the notion that language acquisition is embedded in social interaction.
____________________________________________________
Laakso, M., Helasvuo, M-L. and Savinainen-Makkonen, T. (2010). Children’s Early Actions in Learning Language: A Study of Proto-words and Pointing Gestures in Interaction between One-year-old Child and Parent. Sky Journal of Linguistics 23: 199-226. http://www.linguistics.fi/julkaisut/sky2010.shtml

This summary was written by Sue Fox
Posted by Sue at 15:46