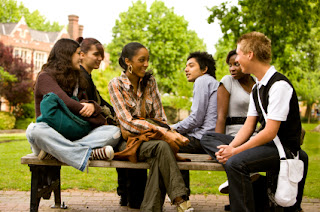 Shall we get some lunch or something?
We’re probably all aware of using expressions such as and stuff like that and or something, particularly when we are talking in informal contexts. Among linguists, these expressions are known as ‘general extenders’ because they often indicate that the previous word is part of a set, so they extend the meaning of that word without having to specify all the members of the set. For example, and stuff in I used to wear punk earrings and stuff refers to a set of things that people wear when they want to look like a punk (see also http://linguistics-research-digest.blogspot.com/2011/10/young-peoples-language-and-stuff-like.html).
Some previous studies have suggested that general extenders are undergoing a process known as ‘grammaticalization' (see Jenny Cheshire's paper on the topic), during which words that were formerly separate become stored and processed as a prefabricated phrase – a familiar example is going to > gonna. In the case of general extenders, some researchers argue that grammaticalization is associated with longer forms such as and stuff like that and or something like that becoming the shorter forms and stuff and or something. In addition, the constructions may develop new interactional functions and in the case of general extenders, referring to a set is not necessarily their most important function now. Sometimes people use these little words to be purposely vague, to signal that they are not quite sure about something. However their most important function seems to be to create solidarity between speakers. By using a general extender the person speaking suggests that their interlocutor shares their knowledge or opinion, so there is no need to be explicit.
Researchers Heike Pichler and Stephen Levey investigated the use of general extenders in northeast England and set out to test the claim concerning grammaticalization in this feature of speech. They analysed a 260,000-word corpus collected between 2003 and 2005 in Berwick-on-Tweed, situated in the far northeast of England. The sample comprised 36 speakers of working class background, 18 male and 18 female equally stratified across three different age groups labeled as ‘young’ (17-23), ‘middle’ (27-48) and ‘old’ (60-81).
They found that the most frequent form was and that which accounted for almost one-third of the 783 tokens that they analysed. Jenny Cheshire has previously argued that the form and that is indexical of British English working-class speech and the data in this study support that claim. The next most frequently used forms were or something, or whatever and and things like that which accounted for 9%, 7% and 5% of the data respectively. In total, the researchers found a further 91 forms but none of these appeared with great frequency. One thing they noted was that the form and stuff showed a gradual rise from older to younger speakers. The results also showed that males in every age group, particularly the youngest, use general extenders more frequently than females and younger speakers, as a whole, use more than older speakers.
The researchers also conducted statistical tests on long forms (e.g. or something like that) against short forms (e.g. or something) as being an indicator of language change associated with grammaticalization. However, their data did not support the claim and they concluded that there was ‘little evidence to suggest that long variants are gradually being supplanted by short variants’. Furthermore, their apparent-time analysis (i.e. comparing language use among different age groups at a particular point in time) across the three age groups also led them to state that there was ‘no compelling evidence of grammaticalization in progress’. Of course, this does not invalidate the claim for grammaticalization but perhaps this study draws attention to the need to investigate the phenomenon in other varieties.
The researchers themselves conclude by suggesting further avenues to be explored in relation to general extenders and discourse variables more generally. Firstly, real-time data (i.e. data collected at different points in time) would add time-depth to help determine whether change is taking place and whether grammaticalization is playing a role in any such change. Furthermore, future research will show whether the form and stuff is likely to become the default form among young (male) speakers and a ‘serious contender among the youngest generation’.
_______________________________________________
Pichler, H. and Levey, S. (2011). In search of grammaticalization in synchronic dialect data: general extenders in northeast England.  English Language and Linguistics 15: 441-471.
DOI: 10.1017/S1360674311000128
This summary was written by Sue Fox
Posted by Sue at 12:10