Grammar at your fingertips 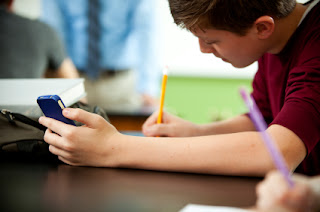 A thoroughly modern way to teach grammar!
How many people reading this blog remember those halcyon days of grammar parsing at school? You know, underlining the nouns in green and the verbs in red? No? Ah, that would probably be because you’re too young! That’s because English grammar teaching disappeared from the English curriculum from the late 1960s until its return in 1990 (though not in the same guise). The consequence is what researchers Bas Aarts, Dan Clayton and Sean Wallis refer to as the Grammar Gap, resulting in the fact that very few UK school teachers who teach English today have explicitly been taught grammar themselves, leaving them feeling ill-equipped to teach it.
As part of a research project at UCL, the researchers organized a series of ‘grammar training days’, introducing basic concepts of grammar to English teachers. At one of these events, they found that only two out of twenty teachers of A-Level English teachers could recall ever being explicitly taught grammar. The research team set about designing a thoroughly modern and ‘accessible and enjoyable way to learn grammar’ which would also enable teachers to teach grammar to their students. The result has been iGE: the interactive Grammar of English, a complete grammar of the English language designed specifically for mobile devices.
The new course is a totally updated version of the Internet Grammar of English published by the Survey of English Usage in 1996. The course was rewritten to take into account the fact that mobile devices are directed by finger movements and the text had to be simplified and shortened to make explanations readable on a small screen. The research team also extended the glossary and added further exercises based on authentic language taken from the Survey’s corpora.  The screen can also be projected from an iPhone or an iPad onto a large classroom screen so that the exercises can be done collectively.
iGE is published on Apple’s App Store and Google’s Android Market. What’s more, there is a free ‘Lite’ version containing the glossary and the first three sections of the course. The researchers conclude by stating that grammar should not be seen as a set of restrictive rules that must be obeyed but rather that it should be seen as a framework within which we communicate. They certainly emphasise the fun factor and literally place grammar at our fingertips. Hmm, grammar was never like that in my day!
__________________________________________________________
Aarts, B., Clayton, D., and Wallis, S. (2012). Bridging the Grammar Gap: teaching English grammar to the iPhone generation. English Today 28/1: 3-8.
doi: 10.1017/S0266078411000599
This summary was written by Sue Fox
Posted by Sue at 10:00

Email ThisBlogThis!Share to TwitterShare to FacebookShare to Pinterest
Labels: Grammar, Language and technology