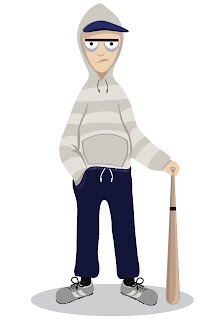 It can be a noun or an adjective; it’s used throughout the media (usually negatively) to describe a certain type of person or behaviour; and it was Oxford University Press’ ‘word of 2004’.  It is, if you haven’t guessed already, the word chav. The Oxford English Dictionary defines chav as:

a young person of a type characterised by brash and loutish behaviour and the wearing of designer-style clothes (esp. sportswear): usually with connotations of low social status

Indeed, it’s this social stereotype that Joe Bennett investigated to see if there was a correlation with the language that’s known as chavspeak.  One point of particular interest, he notes, is that the identity of ‘chav’ is not something with which people voluntarily align themselves. Instead, chavs are always viewed as ‘other people’.  This in itself suggests that there is a very negative evaluation attached to the term.  So what about chavspeak?

Bennett compared two ‘humour books’ that aimed to describe not only the supposed social aspects and cultural practices of so-called chavs, but also what is thought to be characteristic of chavspeak.  In doing this, he wanted to investigate the links between linguistic forms and social practice – why were certain linguistic forms chosen? And, how do these linguistic forms work to characterise and strengthen the view that chavs are representative of an underclass in society?
At the discourse level, chavspeak is presented in the humour books as demonstrating communicative incompetence and rudeness. Bennett points out that this is enhanced by the type of ‘translation’ provided.  For example:

Giss a fag, mate?   ‘Excuse me, but can you let me have one of your cigarettes please?’

This is also the case at the lexical level, where regular English words said to be typical of chavspeak are ‘translated’, drawing on themes such as crime and public disorder:

Shoplifting: ‘the favoured hobby, or indeed job, of most Chavs’

The social connotations exploited by the writers of the humour books in these examples serve to underline the lower class status of anyone who attracts the label of ‘chav’.  However, the most linguistically salient exploitation of social connotations can be found in the phonological features said to be characteristic of chavspeak, shown in the two books by the spelling the writers use. Both the books examined by Bennett mention TH fronting (spelling brother as brovva), glottal stops (with aunty  spelt aun’ie), h-dropping (have spelt ‘ave), <n > at the end of words like runnin and monophthongisation of the MOUTH vowel (mouth spelt maaf).  Each of these phonological features has urban and/ or working class connotations and many are (rightly or wrongly) associated with Cockney English by non-linguists. These spellings therefore link with the assertion in one of the books (Chav!) that chavspeak is some sort of Cockney hybrid.  Bennett notes that these phonological features are the ones that British speakers tend to strongly  associate with people from the lower social classes.

Bennett concludes that chavspeak is a social construct that is continually reinforced by those who draw on existing social stereotypes in order to create it.  He cautions that, while those who exploit the chav stereotype in the media do so under the guise of humour and innocent intentions, this only serves to strengthen what is a negative stereotype. This humour could therefore incubate the type of prejudice that exists in relation to other social stereotypes, and can be a resource for the maintenance of social relations of power.
___________________________________________________
Bennett, Joe (2012) ‘And what comes out may be a kind of screeching’: The stylisation of chavspeak in contemporary Britain’. Journal of Sociolinguistics 16:5-27
doi: 10.1111/j.1467-9841.2011.00521.x

This summary was written by Jenny Amos
Posted by Sue at 08:47