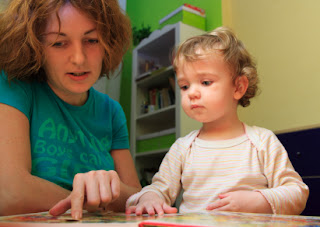 If you've ever heard someone talk to a young child, or have done it yourself, you've probably noticed that it's quite different from how adults talk to other adults. Research comparing talk directed to infants with talk directed to adults has consistently borne this out. In addition to using features such as repetition and “simple” sentences in infant directed talk (or IDS), ‘prosodic’ features such as rhythm, pitch, intonation and stress also vary significantly, and to beneficial effect. It appears that young children not only prefer listening to IDS, but they also use its prosodic features in language learning. IDS stress patterns, for instance, help focus children’s attention on target words, as well as identifying grammatical class, and understanding word boundaries. Features of IDS prosody such as intonation and stress therefore appear to be important for helping young children to acquire lexical, morphological and syntactic information.

Deborah Herold,  Lynne Nygaard and Laura Namy have now found that adults also use prosody to help children understand the meanings of words.  They investigated the use of prosodic cues in the speech of fourteen, native English-speaking mothers interacting with their individual children. The average age of the children was 23 months. The researchers investigated six words with opposite meanings: happy/sad, hot/cold, big/small, tall/short, yummy/yucky, and strong/weak. Each pair was illustrated by images that would be easily recognisable to young children such as, for big/small, a big flower and a small flower and accompanying sentences which included the word being investigated, such as “look at the big one/look at the small one”. The mothers were asked to read and talk about the “picture book” with their children, and to make sure that they read each sentence at least once during the session. The mothers’ speech was then compared with earlier recordings where the mothers had produced each of the sentences as if it was directed to an adult. The two sets of recordings thus yielded talk directed to infants and talk directed to adults, for comparison, and the participants were unaware of the real aim of the study.

Herold, Nygaard and Namy found that mothers systematically varied prosodic cues such as loudness and duration in order to differentiate the meanings of the pairs of words. Adjectives such as happy, tall and strong were all produced more loudly than their opposites (sad, short and weak) (though the differences were negligible for the three remaining pairs of words). Happy, hot, big, short, yucky and weak were all produced with shorter duration than their opposites. Interestingly, happy was the only member of a pair to feature both greater loudness and shorter duration, which the researchers hypothesise may have something to do with the communication of positive emotion. If so, this is a new and significant finding: previous studies have shown that prosody can communicate something about the emotion of the speaker, but this research suggests that features of IDS prosody can provide  information about positive and negative meanings, even when the speaker is not actively experiencing those emotions themselves.

This summary was written by Ishtla Singh