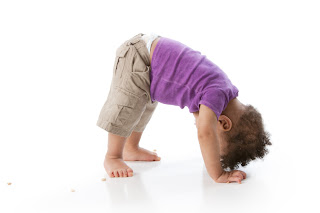 do children use gestures before words to convey actions?

Research has shown that young children use gesture to communicate before they produce their first words. Typically, children from around the age of 10 months use gestures such as pointing to refer to objects before they have acquired the words for those objects. Once a child has pointed to an object (e.g. a dog) it is likely that the child will learn the word for that object (“dog”) within the next few months, either because using gestures provides the child with the opportunity to practice referring to objects before they are verbally able to do so, or because the child is likely to receive verbal input at the time of pointing (e.g. an adult says ‘yes, it’s a dog’), exposing the child to the word “dog” just when the child sees and is thinking about a dog. Gestures, then, appear to pave the way for children’s first nouns.

Young children also use what is known as iconic gestures and these are gestures that either convey actions, such as flapping arms to represent a bird flying, or to convey attributes associated with objects, such as holding cupped hands together to depict the roundness of a ball. Researchers Şeyda Özçalişkan, Dedre Gentner and Susan Goldin-Meadow were interested in finding out whether these types of gestures pave the way for children’s early verbs in the same way that pointing gestures pave the way for children’s early nouns.

They videotaped 40 North American children (22 girls, 18 boys) at home with their parents every 4 months from age 14 to 34 months and collected around 540 minutes of observation in total for each individual child. The children’s families came from a range of backgrounds in terms of income and ethnicity but all the children were being raised as monolingual English. The researchers transcribed all the communicative words and gestures that the children produced. Given the researchers’ interest on actions and verbs, they analysed only the children’s use of iconic gestures to depict actions.

They found that iconic gestures do not serve the same function as, for example, pointing gestures do for nouns. Unlike pointing gestures, which precede and predict children’s first nouns, the results of this study showed that children do not produce iconic gestures until around 6 months later than they produced their first verbs. Instead, the children relied almost exclusively on speech to convey their early action meanings. On average, the children produced their first spoken verb at around the age of 18 months but they did not produce their first iconic gesture until the age of around 25 months.

The researchers suggest four possible reasons why children produce so few iconic gestures in their early development. The first is that the gestures may be physically difficult to produce. However, as they point out themselves, some iconic gestures only involve moving a finger across space - to indicate something moving downwards for example – yet even these simple movements do not occur much before the age of 26 months. Secondly, perhaps the frequency of iconic gestures in parental input is low so that children are not often exposed to models of iconic gestures. Thirdly, the researchers suggest that iconic gestures are likely to impose a greater cognitive load than pointing gestures because there are conceptual difficulties in producing the gesture itself; in other words, children have to work out an action (gesture) which is representative of the action they want to convey, for example the action of hopping two fingers up and down to represent a rabbit hopping. Finally, iconic gestures may be more difficult for children to acquire because actions (and thus verbs) are associated with concepts rather than objects. Verbs express relations between things, and relational concepts are generally learned later than object concepts.