Imitations and repetitions transform children from overhearers to speakers 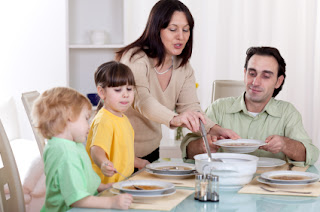 Imagine a mother is talking to her partner or another adult at the dinner table. Suddenly, her very young child, who has been happily eating her dinner, repeats something that the mother has just said. Many caregivers of children will be able to recall such moments, particularly as children have a knack of sometimes repeating the most inappropriate word!
In the above scenario, young children are said to have a peripheral role in multiparty interactions; they are not fully developed language users and are considered to be ‘overhearers’, those who are not included as participants in an interaction but who nevertheless become hearers without much effort. As language socialization studies show, children gradually move from being overhearers to having a more central communicative role as speaker or addressee. But what happens in that intervening period and what strategies do children use in order to move from one role to the next?
Marianne Johansen suggests that children adopt a position of creative imitator, repeating part of participants’ utterances in an imitative way, but also in a creative way because they do it in order to demonstrate attention to an interaction in spite of their peripheral position. She says that these are not merely imitations but social acts which allow the child to participate in the interaction from a non-speaking position. The researcher draws these conclusions from three videotaped dinner conversations of her own family, which includes the target child (her son) who was recorded between the ages of 2.2 and 2.4 years.
Johansen gives examples of her son repeating descriptions of things such as ‘ceremonial hall’ and ‘bombs’, words that he had probably never heard before. The use of these words, she claims, is not to learn the words or to understand their meaning but should be seen as productive social acts in which the child makes an effort to contribute to the act of ‘describing an event experienced by a co-participant’. She also gives many other examples where one participant requests information, confirmation or assessment due to lack of knowledge and when a response is given by the addressee her son then repeats the response. There are also examples of her son gazing directly at the next potential speaker whilst uttering the repetition thereby demonstrating, she says, that they have an interactive function.
A schematic presentation for the organization of the child’s contributions is presented as follows: