What’s going on with you guys? 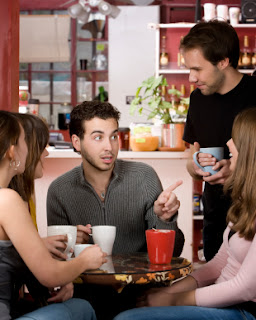 Which one of you guys stole my biscuit?

How do we cope with the ambiguity of you in English? When we say to a group of friends what have you been doing recently? are we asking just one of them, or two or more of them? Research by Theresa Heyd suggests that young people are resolving the potential ambiguity by coining a new pronoun, you guys, used only when they want to refer to more than one person. She traces the development of you guys over a ten year period in the Friends TV series (noting that young people in are also beginning to use you guys as a new plural pronoun).

The six central characters in Friends used both you guys and you when they were referring to more than one individual, but overall you guys was the more frequent form. It accounted for 48 per cent of second person plural forms, whereas you accounted for 42 per cent. Other forms, such as all of you or you all, accounted for about 10 per cent. More important than the overall frequency of you guys, though, is the fine detail of how the characters use the form over the period, as this reveals some of the general pathways through which this kind of language change can occur.

You guys seems to have evolved from contexts that are more emotive and discourse-oriented. Its most frequent use is as a vocative, directly involving the people being addressed, as in Phoebe’s hey you guys, I don’t mean to make things worse but umm I don’t want to live with Rachel anymore.  Gradually, though, you guys comes to be used in more neutral contexts, and becomes part of the grammatical structure of the language. Over the ten year period it is increasingly used as a subject pronoun (as in you guys were a lot more supportive when I wanted to make denim furniture – again from Phoebe) and then as an object or indirect object pronoun (as in I’ll give you guys a break).  At the beginning of the period you guys was heard more often than expected in questions, which also directly involve the people being addressed (since there is an expectation that they will reply to the question), but it is then used more and more frequently in non-questions, a further indication that it is losing its emotive connotations and behaving more like an ordinary pronoun form.

The development of the pronoun goes hand in hand with a change in the
meaning of the noun guy. Although guy once referred only to male humans,
its main use now is for ‘mixed reference’, to a group of both males and
females.  As a pronoun, you guys in Friends also has mixed reference most of
the time: 67% of the forms referred to one (or more) male and one (or more)
female together. Heyd notes that in other situations (outside the Friends
series) you guys is even heard referring to non-humans, a further indication
that its meaning is now bleached: she gives the example of “what happened
to you guys?” uttered by a scientist to the dinosaurs he is studying.

In the earliest Friends programmes, female characters lead in using you guys as a plural pronoun. Eventually, though, the male characters overtake them – a gender pattern that is often attested when language changes.

One question raised by this study is whether the language heard in Friends accurately reflects the language used in everyday life. Heyd finds that the frequency of you guys in Friends is far higher than in the spoken sections of the Corpus of Contemporary American English for the same ten year period.  It is also higher than in a 2008 corpus of email hoaxes. She points out that although the Friends dialogue sounds convincingly representative of the spontaneous English of young urban professionals, it is of course more meticulously scripted, rehearsed and refined than real–life spontaneous conversation. Scriptwriters may strategically employ innovative features such as a new pronoun form to help “stage” contemporary speech. What remains to be seen is whether the heightened influence of innovative forms such as you guys in a popular TV series like Friends might influence the language use of its viewers.

This summary was written by Jenny Cheshire
Posted by Sue at 11:37

Email ThisBlogThis!Share to TwitterShare to FacebookShare to Pinterest
Labels: Language and gender, Language and Media, Language Variation and Change, Morpho-syntax