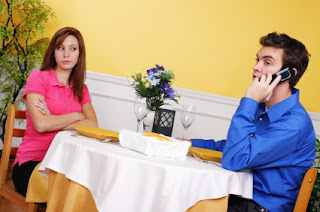 Is talking on a mobile in this situation acceptable? What's your view?
﻿
How do you feel when you’re eating dinner at home with the family and one of the people at the table starts to talk on their mobile? A recent study by Naomi Baron and Elise Campbell suggests that if you don’t feel upset, the chances are you’re male, or perhaps from . Baron and Campbell investigated gender differences in the way people use their mobile phones and in their attitudes towards mobiles. They asked 2001 university students aged between 18 and 24 a series of questions including how acceptable it is to use a mobile at family dinner, with friends in a café, and at a supermarket checkout, as well as in public situations like walking and being in a bus. By collecting data from 5 different countries (, the , , and ), they were able to compare the role of gender versus culture (admitting that this can only be to the extent that culture corresponds with nationhood).
In all three personal situations, men were more likely than women to find talking on their mobiles acceptable – except in , where there were no gender differences. As many as 41 per cent of the Korean students found it “always” or “usually” acceptable to talk on their phones during family dinners, compared to 14 per cent of the Swedish students and only 3 per cent of the Italians. Everyone was more tolerant of texting during family dinners, though here too more men than women found this acceptable behaviour. By contrast, only the Japanese found it unacceptable to speak on their phones in a bus, presumably showing that having prominent signs on public transport reminding passengers not to use their phones, as happens in , really does have an effect.
Overall, more women than men claimed to prefer talking on the phone to texting because they “wanted to hear the voice of their interlocutor”. The researchers suggest that this reflects the importance of social connection for women. Equally, though, more women than men claimed to choose texting because “talking takes too long”. These two findings seem contradictory, but Baron and Campbell point out that women may prefer to avoid making a curt phone call because this may seem impolite.
Interestingly, overall about 30 per cent of the students reported pretending to talk on their phones “at least occasionally” to avoid conversation with an acquaintance. Women, overall, were more likely to pretend to be talking on their phones in order to avoid talking to strangers – hardly surprising, the authors point out, since women are more physically vulnerable in this type of situation. More surprising is the stark cultural difference between Americans and Italians: nearly 13 per cent of the American students claimed to avoid acquaintances at least once a month by pretending to talk on their phones, compared to just over 2 per cent of the Italian students. This finding, when seen together with the very small proportion of Italian students who found it appropriate to talk on their phones during a family dinner, supports previous research showing that Italians strongly value face to face communication with friends and family.
The researchers conclude that gender is just one factor influencing how young people use mobile phones. Sometimes culture seems to be a more critical factor. They also point out that digital technology changes rapidly, so that studies carried out even just a year or so after theirs may well yield different results, perhaps especially in terms of reported frequency of use of mobiles. Even so, they predict that gender distinctions and some culturally-driven differences are likely to persist.
_________________________________________________________
Baron, Naomi S. and Campbell, Elise M. 2012. Gender and mobile phones in cross-national context. Language Sciences 34: 13-27.
doi: 10.1016/j.langsci.2011.06.018
This summary was written by Jenny Cheshire
Posted by Sue at 10:15

Email ThisBlogThis!Share to TwitterShare to FacebookShare to Pinterest
Labels: Communication, Language and gender, Language and technology, Language in Social Context