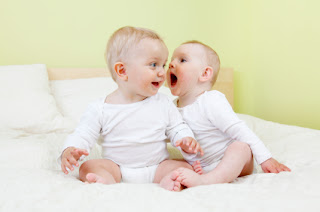 one language or two: does it make a difference?

Do bilingual children develop language more slowly than children acquiring only one language? This is the question that a team of researchers from Florida Atlantic University set out to answer.

Erika Hoff and her colleagues measured the language skills of 103 children, both boys and girls, when they were aged 1 year and 10 months, 2 years and 1 month, and finally at the age of 2 years and 6 months. 47 children were bilingual, acquiring both Spanish and English, and 56 were monolingual, acquiring only English. All the children were from families with a high socioeconomic status.

Importantly, though, this was only the case when the children’s skills in English were measured. When both English and Spanish words were included, the total vocabulary size for the bilingual children was no different from that of the monolingual children.
In other words, the bilingually developing children were learning words at the same rate as monolingual children, but their word learning was, like their language exposure, divided between two languages. Previous research had also shown that the size of a child’s vocabulary depended on the amount and type of language to which they were exposed, but what was new about this study was that similar results were obtained for grammar. Measurements of the grammatical complexity of the children’s speech, such as whether they produced combinations of words rather than single word utterances, also showed that the bilingual children lagged behind the monolingual children, but only when their skills in English were tested – not when their abilities in both English and Spanish were taken into account. As the researchers point out, this contradicts the idea that children’s vocabulary depends on what they hear, whereas children’s grammar develops as their cognitive processes become more mature. The findings suggest, instead, a link between vocabulary and grammar that could be either direct or indirect.