Welsh and English in Wales 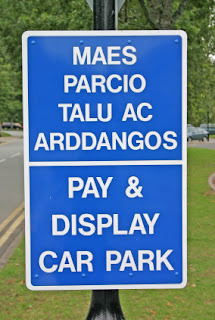 No excuses for not paying!

Language policy and planning initiatives devoted to the revival of the use of Welsh in Wales appear to have been successful in halting the decline of the language. In fact, census data in 2001 showed that the use of the Welsh language among speakers had increased by an impressive 1.8% in the previous decade. Coinciding with this increase has been an increase in the public visibility of Welsh and English bilingualism, for example in road signs and public notices and on more personal items such as T-shirts. Is this increased visibility of bilingualism simply an index of the revival efforts? Researcher Nik Coupland says that ‘this is too sparse an account’ and argues that there is a wide range of social forces that impact on language display in Wales.

Coupland has looked at a range of images that are currently on display in Wales and suggests that they can be ‘framed’ in five different ways. The first two are indicative of the way that visible bilingualism in Welsh has been institutionally promoted in Wales. The other three frames tend to reflect the context in which Welsh is being used and, to an extent, the attitudes of those displaying the images.

Nonautonomous Welsh refers to the display of Welsh throughout most of the 20th Century, when Welsh was either considered to be inappropriate for use as a public code or it was heavily anglicized, particularly along the Welsh/English border. Examples are street names, which clearly draw on Welsh but which use English orthography followed by the English word street or road e.g. Danycoed Road. In this frame, then, Welsh can be seen to be ‘delegitimized and publicly subordinated to English’.

Parallel-text bilingualism describes the dominant pattern of bilingual signage over the last two decades and which promotes Welsh and English as being on an equal footing, as in the car park image above. In this case the sign has Welsh first, common in areas where there is a high proportion of bilingual speakers, but in areas where there are fewer bilingual speakers the signs are often English first. It is noteworthy, though, that an equal amount of visual space is given to both languages. These parallel-text displays reflect the current language policy of Wales.

The third frame is what Coupland calls The frame of National Resistance and links to images which are displays of language activism in Wales and tend to promote the idea that Welsh is under threat, primarily from English. One example given is a caravan parked in a field with the slogan ‘SPEAK OUR LANGUAGE!’ painted on its side, which clearly speaks to potential English-speaking incomers to the area. These activist images are perhaps seen more in northwest Wales in the denser Welsh-speaking areas.

The fourth frame, Welsh exoticism, looks at images which promote Welsh as what Coupland calls a ‘consumable cultural curiosity’ and which are generally embedded within the promotion of Welsh in the tourist industry. The most obvious example is the name of the town Llanfairpwllgwyngychgogerychwyrndrobwllllantysiliogogogoch  which is displayed, along with a syllable-by syllable guide to its pronunciation, at the town’s railway station. The town is conventionally known as LlanfairPG or Llanfairpwll but here the sign promotes Welsh as being exotic, a language that cannot be pronounced without assistance.

In the final frame of Laconic Metacultural Celebration Coupland looks at the way that language display can be a ‘personalized and personalizing practice’. He discusses the way that a small commercial company in north Wales projects Welsh language and culture onto T-shirt and sweatshirt images. One example, for instance, promotes the historic value of Welsh by parodying a well-known beer-advertising slogan: the T-shirt text reads Cymraeg (meaning Welsh) with the subscript Probably the oldest living language in Europe. Other texts allude to Welsh historical events or cultural phenomena; the use of 62 on a T-shirt for instance is a reference to an important year, 1962, in the revitalization of Welsh and the year that the Welsh Language Society was formed. The slogans invite the reader to puzzle over and work out the references for themselves but, as Coupland points out, they are all celebratory.

This summary was written by Sue Fox
Posted by Sue at 14:58