Agreement in the House of Lords? Not likely! 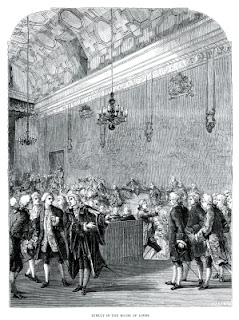 Anyone who has watched Question Time in either the House of Commons or the House of Lords of the British Parliament will know that there is a certain kind of institutional rudeness which is acceptable as part of the ritualized confrontational encounters that take place there. It is the job of MPs and Members of the House of Lords to question government ministers on matters for which they are responsible. Disagreement is therefore part and parcel of this particular context and interaction.

However, the participants are also bound by the rules of the respective Houses and perhaps this is especially so in the House of Lords, where some of the highly formal traditions have been in place since the 14th century and which account for the sometimes archaic language and behaviour. So, in this situation, how do the Lords ‘do’ disagreement? Researcher Jessica Robles collected around 300 video recordings and transcripts of the meetings (from the official document called Hansard) of interactions in the House of Lords, available from the United Kingdom Parliament website.

In this paper she provides an in-depth analysis of two examples of disagreement from the oral question sessions of the House of Lords (you can read the whole article here) to support her main argument, which is that disagreement is achieved through what she calls ‘talking around the issue’. Robles argues that there are three dimensions to the practice of talking around the issue. These are: 1) institutional positioning, in which the talk itself positions the participants within their current role and within the institutional context of the government structure as well as in opposition to others. 2) display of emotionality, a way of talking around the issue by appearing to disagree but not actually specifying what the disagreement is about. The talk contains markers of ‘feelings’ that cue people to a particular attitude being presented – in one example, Robles includes such things as lack of fluent speech, use of emphatics such as ‘absolutely’ and ‘precisely’ and nonverbal expressions such as frowning, rolling the eyes and shaking the head. 3) orientation to the issue , in which talking about the focal point of an argument may be avoided explicitly but is referred to implicitly. By using these three practices, disagreement is thus carried out through indirect orientations to an implied issue.

This summary was written by Sue Fox
Posted by Sue at 14:06