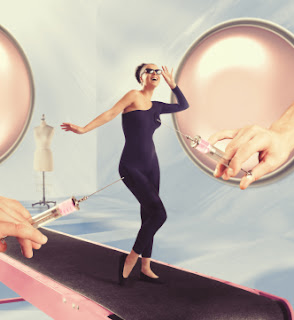 In pursuit of the ideal body?

There is no doubt that cosmetic surgery in the UK and the US (and many other countries) is big business and is still a growing industry. Over 10,000 women in the UK underwent surgery for breast enlargement in 2011, and one can only hazard a guess at the number of people undergoing non-surgical procedures, such as botox injections. Research studies have shown that media representations of cosmetic surgery tend to present operations as a quick and easy solution to achieving a changed (and ideal) body and, in the process, feeling better about one’s self, without paying very much attention to the risk or recovery times involved. So how do cosmetic surgery advertisements convey these ideas?

Researchers Maria Martinez Lirola and Jan Chovanec collected a set of 20 cosmetic surgery leaflets handed out to passers-by in the streets of Alicante (Spain) by a leading Spanish cosmetic surgery clinic during the years 2007 to 2009. Their research aimed to show how the advertisements combined language and visuals to persuade people, mainly women, to have cosmetic surgery. They analyse two of the leaflets in depth but they also make relevant points about the leaflets in general.

The visual characteristics involved in the construction of meaning within the leaflets are described in terms of dominance, frames and information. It was noted that in 19 out of the 20 texts the dominant picture was of a young, white woman, usually scantily clothed in a seductive pose and accompanied by a man. The researchers state that the woman is the main focus because although cosmetic surgery is offered to men, women are the primary clients. All of the men and women in the pictures were in fact white and young, representative of the main intended audience. The use of frames refers to other visual elements of the text and where they are placed. In the leaflets, pictures of other people are much smaller than the main picture and placed in frames around the side. The layout of information is also important; new information is usually placed to the right, the top of the page is associated with the ‘ideal’ and the bottom associated with the ‘real’. The leaflets contained the logo and name of the cosmetic surgery clinic at the top, placing the perception of cosmetic surgery within a medical frame. The bottom part of the leaflets usually showed the bigger parts of the body and any display of ‘action’ (e.g. in one leaflet the woman plays with the strap on her underwear). The centre of such texts usually coincides with the main information.

The researchers note that the linguistic elements of the text enhance and complement the visual aspects of the advertising messages. The texts used ‘highly positive evaluative expressions and instructional phrases’ of the kind shared with other kinds of advertising. Adjectives such as ‘best’ and ‘highest’ were used and rhetorical questions (e.g. ‘what else can we ask for?’) were also frequently used. Common persuasive techniques running through the texts related to competitive pricing, a free gift, the rhetoric of numbers (e.g. ‘over 10,000 patients’), claims about the professionalism of staff and the positioning of cosmetic surgery within a medical frame. All of these devices are aimed at persuading potential clients that surgery is safe and affordable and, the researchers claim, the advertisements also play subtly on inner fears of ageing.