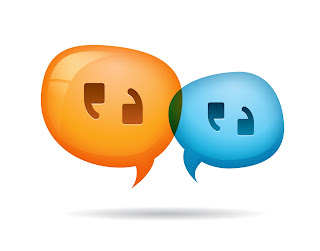 Which of the above do you think is more formal, said or was like? Why? If you’re telling a story and start reporting what someone else has said, how do you think that you would introduce the quote?  What would influence your choice?

These are the sort of questions Natalia Blackwell and Jean Fox Tree investigated by looking at the speech and opinions of students at the University of California, Santa Cruz.  The focus of their study was the verbs that people use to introduce direct speech (such as said/say, was like/ is like, went/ goes etc.) and it’s these verbs which are known as ‘quotatives’. They explain that there are two main approaches to how previous research has viewed the choice of quotatives.  The first is known as ‘quotation-centred’.  This approach says that it is the content of the quote that determines what quotatives are used.  For example, say is thought to introduce quotes which are more accurate and true to the original, while be like (i.e. she’s like/ I was like), although more emotional and dramatic, indicates that what is reported is more vague in relation to the original event.  In contrast, the ‘social-context-centred’ proposal claims that it is the social relationships between, for example, the speaker and the person being quoted or the speaker and the listener that influences which quotatives are chosen.

Blackwell and Fox Tree designed 7 experiments to test what factors may influence quotative choice.  The motivation for designing a range of experiments was that, unlike using a corpus of spontaneous speech, conditions could be controlled and, therefore, comparisons would be more valid.  The design of the experiments varied in form and included tests where participants were asked to guess which quotatives (either say or be like) had been bleeped out of recordings (to judge whether it was the content of the quote which guided selection), and the telling of stories to different audiences relating to video clips they watched (to judge whether social factors influenced choice).

The results of the various experiments showed that participants thought there was a distinct difference between say and be like, with be like particularly described negatively as irritating and annoying.  As a result, a comparison of their actual use and their opinions showed that most participants over-estimated their use of say.  They also found little evidence supporting the ‘quotation-centred’ approach to quotative use, as, for example, participants couldn’t select the correct quotation when it was missing from sound clips they were played.  However, they did find evidence supporting the ‘social-context-centred’ approach as participants adjusted their choice of quotative according to who they were quoting and the status of the addressee – the higher the status, the more say was used. They suggested that use of say, in contrast to be like, enabled speakers to signal the relationship status among the person being quoted, the speaker and the addressee. In addition to these observations, Blackwell and Fox Tree suggested that, even though there was little evidence to suggest that say was used instead of be like to reflect the accuracy of the quote, say was used extensively when quoting writing or set phrases.  This, they suggested, indicates that say may be adopting specific functions in the language.
_______________________________________________________
Blackwell, N. and Fox Tree, J. E. (2012) Social Factors Affect Quotative Choice. Journal of Pragmatics 44: 1150-1162.