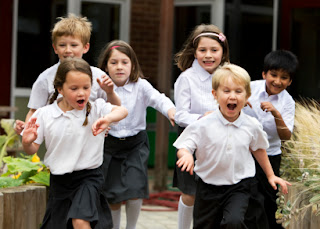 They was chasing us!

Among British schoolchildren, the National Curriculum requires that children aged 5-7 years old ‘should be introduced to some of the main features of spoken standard English and be taught to use them’ while children aged 7-11 years old ‘should be taught the grammatical constructions that are characteristic of spoken standard English and to apply this knowledge appropriately in a range of contexts’. Quite what ‘spoken standard English’ entails is never explicitly stated, except that it is disassociated with a limited number of non-standard grammatical features, one of which is subject-verb agreement in past tense uses of the verb BE (i.e. you was, we was, they was, the boys was), often referred to among linguists as was/were variation.  Given that the use of was in these contexts is widespread in many English varieties worldwide, is it socially realistic to expect children to use standard were consistently, particularly in informal situations?

Researcher Stephen Levey examined the use of was/were variation in children aged 7-8 years old compared to children aged 10-11 years old to see whether the increased exposure to formal education correlated with a rise in the frequency of standard variants (in this case, standard were usage) in children’s speech. His data came from children that he recorded between 2000 and 2004 in a large primary school in an eastern outer suburb of London. To ensure that the children used their most informal speech, they were encouraged to share stories in which they had been personally involved and which had high emotional content, such as arguments, accidents and fights. The data yielded a corpus of 60,000 words and Levey examined over 1400 uses of was or were, including both standard and non-standard occurrences.

The results of the study showed that rates of non-standard was usage among the children in this part of London is particularly high (59%), comparable to rates found in other studies which examined the speech of older adolescents in the same area. Non-standard was, then, is clearly a robust feature of English used in the local community. Levey also found that there was a statistically significant sex-differentiated pattern, with boys in both age groups using more non-standard was than girls. While this result is not surprising in itself, it suggests that sex-differentiated patterns may emerge at a much younger age (around 7 years old) than has previously been reported (around 10 years old).

A key finding, though, was that increased exposure to formal education had no significant effect on the children’s use of non-standard use of was in their informal speech, suggesting that local community-based norms exert more influence on informal speech than normative pressures exerted by the school. So, what do these results tell us about the teaching of spoken standard English? While Levey acknowledges the importance of standard English in children’s education, he proposes that it is unrealistic to expect children to become proficient in standard English simply by teaching them to replace their non-standard variants with standard ones. Instead, he urges for the expansion of classroom-based activities that are informed by the findings of sociolinguistic studies, helping children to increase their awareness of their own usage of language, as well as that of others. He also emphasises the need for research which addresses teachers’ reactions to a broad range of nonstandard features in children’s speech. Perhaps most importantly, though, is the need for a more finely-tuned definition of what counts as standard spoken English and how it should be taught, taking into account the fact that we find structured variability in everyday speech.
__________________________________________________
Understanding children’s non-standard spoken English: a perspective from variationist sociolinguistics. Language and Education 26(5): 405-421.

This summary was written by Sue Fox
Posted by Sue at 15:07