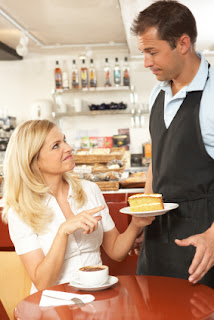 I said to the waiter "This cake isn't very (h)fresh"

Laughter isn’t always shared by all the participants in interaction.  Sometimes, we introduce laughter into our speech which isn’t returned by the others in the conversation.  Thus, we can make the distinction between laughter and humour (the latter of which is shared).

Taking this distinction, Rebecca Clift analysed instances of laughter which occurred in reported speech.  The examples of laughter that she examined weren’t featuring in humorous speech and, as a result, the laughter which the speaker produced wasn’t replicated by the addressee.  In addition, these examples differed from other types of reported speech in that they were not produced as part of storytelling (which is where we generally find speakers using the direct quotes of others).  For example:

Clift’s analysis also highlights how this non-reciprocal laughter occurs in speech which is some kind of negative assessment or complaint. Complaints tend to be established through stories which provide the details and set the scene.  This can be through a collaborative sequence of talk by all the participants in a conversation.  However, the actual complaint is achieved in one single turn by a speaker following the build-up sequences. In this context, the laughter tokens seem to appear in those lexical items which are central to the complaint being made. In doing this, the speaker can use the laughter tokens to lessen the severity of a complaint.  Previous work, highlighted by Clift, suggested that people will try to avoid coming across as ‘complainers’ and, as a result, they will alter their speech to avoid this label being attached to them.

This summary was written by Jenny Amos
Posted by Sue at 13:52